Are markets starting to price in the next easing cycle from the Federal Reserve? This does not seem so. Treasury yields were mostly little changed over the past 24 hours. US headline CPI expectations (YoY) for 2023 barely nudged from the end of last week. You can also look at the 1-year breakeven rate to gauge inflation estimates, and those were also little changed from Friday.

With that in mind, it seems there might have been a display of exhaustion to start off the holiday-shortened week for Wall Street. We are also approaching the end of the second quarter, opening the door for rebalancing activity.

This spelled bad news for the Yen, which tends to underperform when overall market sentiment is rosy. As a result, risk appetite helped propel USD/JPY to its highest since 1998! Last week, the Bank of Japan defended its ultra-loose policy despite headline inflation now slightly above target. While it offered some verbal jabs against the rapidly weakening currency, it physically did little to defend it, leaving it vulnerable to what happened in markets on Tuesday.

Wednesday’s Asia-Pacific economic docket is fairly light, placing the focus for traders on overall risk appetite. The rather rosy session on Wall Street could mean some follow-through for regional exchanges, perhaps opening the door for Hong Kong’s Hang Seng Index to rally alongside the Nikkei 225 and ASX 200. This may continue leaving the Japanese Yen at risk. However, it remains tough to be fundamentally bullish equities for the time being.

USD/JPY shot higher above the 135.16 – 135.57 resistance zone, which was made up of the 2002 peak. This has pushed to levels last seen in 1998, exposing the 78.6% Fibonacci extension at 139.68. Confirmation of the breakout is lacking for now as negative RSI divergence persists. The latter is a sign of fading upside momentum, which can precede a turn lower. In such an instance, keep a close eye on the rising trendline from March which could reinstate an upside focus. 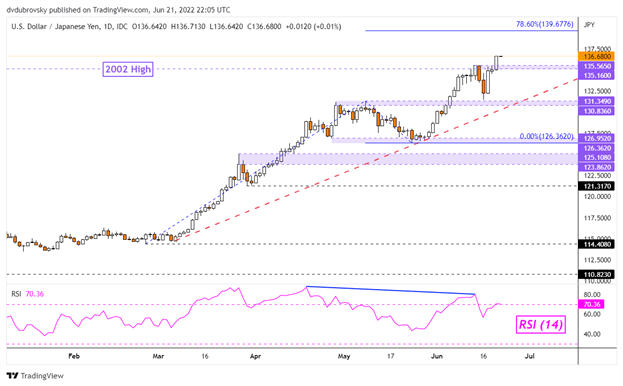