Healthy eating: How much iron do you need?

Iron deficiency is a serious health problem, which often manifests as exhaustion. There are many unknown symptoms of iron deficiency that one has to know about. Iron is a nutrient, but it is an extremely important mineral for our body. It helps to transport oxygen throughout our body.

Dr Subhaprakash Sanyal, director hematology and BMT dept at Fortis Hospital Mulund says iron is an important component of hemoglobin, the substance in red blood cells that carries oxygen from lungs to transport it throughout your body. “Hemoglobin represents about two-thirds of the body’s iron. If you don’t have enough iron, your body can’t make enough healthy oxygen-carrying red blood cells. A lack of red blood cells is called iron deficiency anemia.”

According to the doctor, anemia — a result of iron deficiency — has been a major public health burden in India. “The incidence of anemia is as much as 53.2 per cent among women and 21.7 per cent among men,” says Dr Sanyal, adding that one can treat iron deficiency anemia with supplements. “Once your iron levels go up, you should start to feel better.”

– Fatigue or weakness
– Pale or yellow skin
– Shortness of breath
– Dizziness or lightheadedness
– Headaches
– Fast or irregular heartbeat
– Chest pain
– Cold feet and hands
– Brittle, cracked nails, spoon-shaped nails
– Hair loss
– Cracks near the side of your mouth
– Pica (cravings for things that aren’t food, like dirt, starch, clay, or ice)
– Sore and swollen tongue
– Restless legs syndrome (an urge to move your legs while you’re in bed)

But, how much iron does one need?

“That depends on your age, gender, and overall health. Infants and toddlers need more iron than adults, because their bodies are growing quickly. In childhood, boys and girls need the same amount of iron — 10 milligrams daily from ages 4 to 8, and 8 mg daily from ages 9 to 13.

“Women need more iron because they lose blood each month during their period. That’s why women from ages 19 to 50 need to get 18 mg of iron each day, while men the same age can get away with just 8 mg,” the doctor explains. 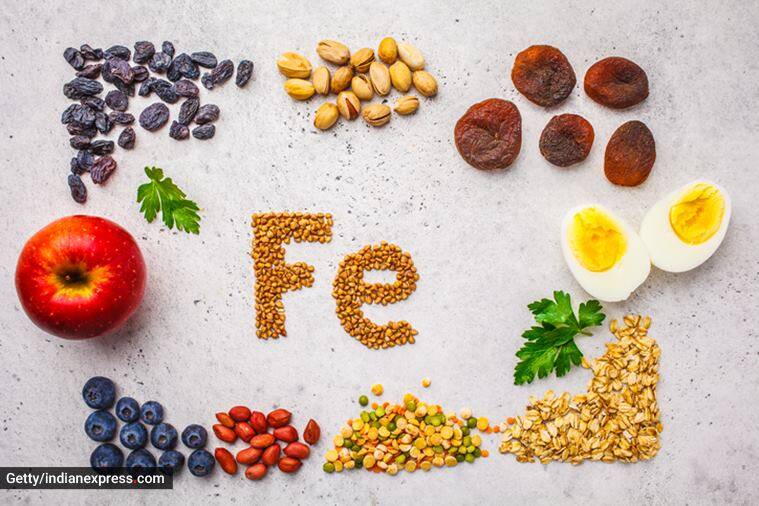 You might need more iron, either from dietary sources or from an iron supplement, if you:

* Are pregnant or breastfeeding.
* Have kidney failure (especially if you are undergoing dialysis, which can remove iron from the body).
* Have an ulcer, which can cause blood loss.
* Have a gastrointestinal disorder that prevents your body from absorbing iron normally (such as celiac disease, Crohn’s disease, or ulcerative colitis).
* Take too many antacids, which can prevent your body from absorbing iron.
* Have had weight loss (bariatric) surgery.
* Work out a lot (intense exercise can destroy red blood cells).
* If you are a vegetarian or vegan, you may also need to take an iron supplement, because the body doesn’t absorb the type of iron found in plants as well as it absorbs the iron from meat.

Foods rich in iron include: