Bollywood actress Yami Gautam has been garnering praises from all corners for her splendid performance as a police officer in the just-released film Dasvi. While fans loved her versatility, a ‘certain platform’ called the actress ‘dead girlfriend in Hindi films’ that made her furious. Reacting to the said review of her performance in the Abhishek Bachchan starrer, Yami slammed it on Twitter and said “it’s extremely disrespectful.”

Yami Gautam tweeted, “Before I say anything else, I’d like to say that I usually take constructive criticism in my stride. But when a certain platform keeps trying to pull you down consistently, I felt it necessary to speak up about it.” Rating the actress’ performance, the article read, “Yami Gautam is no longer the dead girlfriend in Hindi films, but the combative smile is starting to get repetitive. The only worthwhile thing to come.”

In a thread of tweets, Yami further explained, “My recent films & performances include ‘A Thursday’, ‘Bala’, ‘Uri’ etc & yet this is qualified as a ‘review’ of my work! It’s extremely disrespectful!” “It takes years of hard work for anyone & especially a self-made actor like me to keep proving our mettle again & again with every opportunity. This is what it comes down to from certain reputed portals!,” she added.

She also asked the ‘certain platform’ not to review her performance in the future as it will be ‘less painful.’ 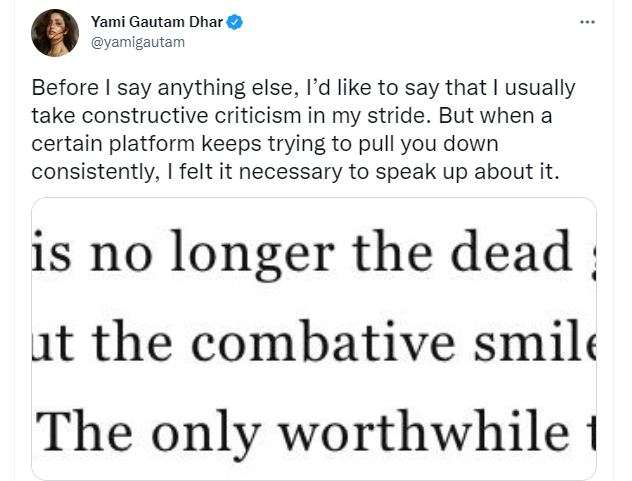 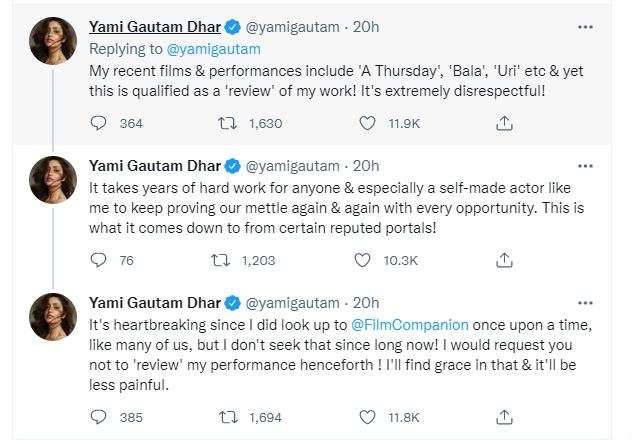 Meanwhile, Yami Gautam played the role of a Haryanvi cop in the film Dasvi. Talking about the same, she shared, “I had a lot of fun playing a Haryanvi cop in the film and I’m ecstatic about the initial response to my performance. My family, my team, and some friends, who are always honest about their opinions with me watched it a few days ago and I’m glad they strongly connected to my character throughout the film. I’ve attempted something very different and as an actor, I get my adrenaline rush from doing that.”

On the work front, Yami Gautam has an exciting slate of movies ahead. She will be seen in OMG2, Dhoom Dham, and a few more unannounced projects.