Every year, on the last Sunday of January, World Leprosy Day (WLD) is observed to “celebrate people who have experienced leprosy, raise awareness of the disease, and call for an end to leprosy-related stigma and discrimination” that continues to alienate lakhs of people worldwide. This year, the day will be celebrated with the theme ‘United for Dignity’ to “honour the dignity of people who have experienced leprosy,” according to the World Health Organization (WHO).

Data published by WHO in September 2021, for the calendar year 2020, showed a drop in new cases of 37 per cent on the previous year. This, according to WHO, highlight that measures against leprosy, including case detection and treatment, have been disrupted due to the Covid-19 pandemic. The stigma attached to the disease continues to be an added obstruction.

Before we delve deeper into the dynamics hampering leprosy control interventions, let’s know more about the disease and the risk factors.

It is a chronic infectious disease that causes severe disfiguring skin sores and nerve damage in the arms, legs and skin areas around your body, explained Dr Aravinda G M, Consultant – Internal Medicine, Manipal Hospital, Jayanagar. “Outbreaks have affected people on every continent. Today, about 208,000 people worldwide are infected with leprosy, according to WHO, most of them in Africa and Asia.”

According to Dr Aravinda, a slow-growing bacterium called M leprae causes leprosy. “If a person’s immune response to the bacterium is weak — or does not occur at all — M leprae can spread through the skin, the peripheral nerves, and, at times, into deeper tissues,” he said.

The expert, however, highlighted that more than 95 per cent of people around the world are naturally immune to M leprae, making leprosy a rare disease.

Further, he listed people who are more at risk of contracting leprosy.

*People living in high-risk areas– Countries with the most number of existing and new cases include India, Indonesia, and Brazil.

*Gene susceptibility- It’s thought that those who contract leprosy have genes that make them susceptible to the infection once exposed. Susceptibility to leprosy tends to run in families, but the inheritance pattern is still unknown.

*Children– They are more susceptible to developing leprosy than adults.

*Individuals with weakened immune systems– People with chronic diseases like diabetes, HIV, or heart disease may be more likely to develop leprosy.

India has the highest burden of leprosy (57 per cent of new cases) in the world, Dr Anil Kumar, Deputy Director General (Leprosy), Government of India, said. “As of October 2021, leprosy cases on record are 60,077.”

He added that disability cases caused by leprosy also continue to be the highest in the country. On being asked about the biggest challenge affecting the control program in India, he said, “It is the long incubation period of disease, usually 5 to 7 years and maybe up to 20 years. Due to this, it is taking time to make India leprosy-free.”

The pandemic, too, proved to be a major deterrent in the efforts taken for the prevention of leprosy. Dr Ritu Chaudhary, State Leprosy Officer (SLO), Delhi State Health Mission said, “The onset of leprosy is subtle and silent, so due to pandemic situations people usually ignore signs and symptoms of the disease which delays treatment.”

The pandemic not just affected the detection of the disease but also its treatment, Dr Chaudhary highlighted. “Patients on treatment moved to their native places and stopped treatment due to restrictions and lockdowns. Some hospitals converted to Covid dedicated wards during the surge of cases which further hampered the management. It also affected house to house active search due to containment zones and people on home isolation.”

Keeping this in mind, Yohei Sasakawa, WHO Goodwill Ambassador for Leprosy Elimination, launched an awareness campaign called ‘Don’t forget leprosy’, with an aim to keep leprosy from slipping from view amid the Covid-19 pandemic and ensure that the needs of people affected by leprosy don’t get neglected.

Further, the State Control Cell explored a few strategies to overcome the hindrance caused due to the pandemic. Training of health care workers on active case search during Covid situations to prevent transmission of infection among family members, society and their own family members, use of digital media for awareness and meetings, and planning for circulation of helpline numbers for teleconsultation are among the few measures taken, Dr Chaudhary shared.

Despite an increase in awareness and development in leprosy control initiatives, the stigma attached to the disease is one of the biggest factors curbing its elimination. According to Sasakawa, what makes leprosy such a challenge is the discrimination that accompanies it—discrimination that has been recognized as a human rights issue by the United Nations.

“Stigma is attached with the disease, but various actions are being taken to reduce the stigma. Sparsh Leprosy Awareness Campaign, which is organised on January 30 every year since 2017 in all villages and urban areas in India, is also targeted to reduce stigma,” Dr Kumar told indianexpress.com.

“During this, leprosy affected persons are invited and felicitated. Various discriminatory acts have been repealed like the leper’s act. Centre has also written to all the states to take action to repeal all such acts,” he added. 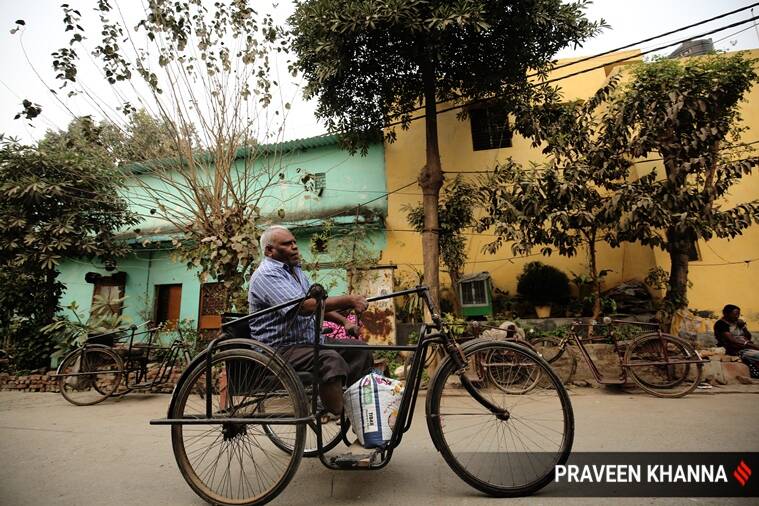 The stigma attached to the disease ends up alienating lakhs of patients worldwide. (Express photo by Praveen Khanna)

Emphasising the fact that even Mother Teresa — who served for years among those with leprosy — but never contracted it herself, Dr Aravinda said, “It is difficult to contract leprosy from someone else. You cannot get leprosy by shaking hands or casual social contact. Hence, people with leprosy can continue to lead a normal life among friends and family.”

The first step towards eliminating leprosy is recognising that it is a challenge. “We cannot deny that leprosy continues to persist in our country. We have to assess the extent and incidence of leprosy in our country,” Deepak Kapur, Head, Rotary Club Alliance for Leprosy Control said.

Following this, it is important to formulate a plan to create awareness about the disease and train personnel. “They need to be sensitised and trained in all the requisite skills needed to begin active case finding. Once identified, we need to connect patients to disappearances, provide them access to the free medication made available by the government and make sure it reaches the beneficiaries. We would also need to provide palliative care — customised foot ware, immunity-boosting medicine, bandaging of sores,” Kapur added.

He called for making leprosy control “a people’s movement”.

“The best way to prevent the spread of leprosy is the early diagnosis and treatment of people who are infected. For household contacts, immediate and annual examinations are recommended for at least five years after the last contact with a person who is infectious,” Dr Aravinda concluded.