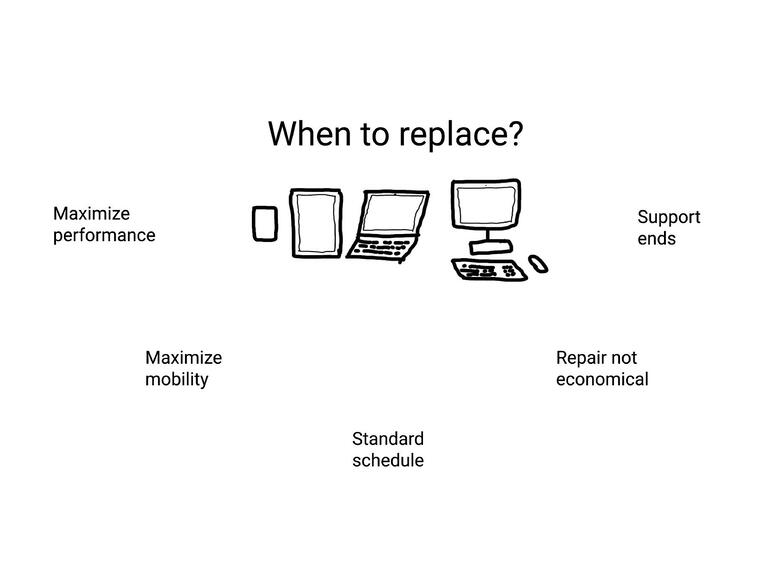 The time frame for replacing employee equipment varies depending on a number of factors. IT leaders might reasonably implement replacements by following any of these five schedules.

A prudent IT leader will define and implement an equipment replacement strategy for devices that people in the organization use, such as phones, tablets, laptops and desktop computers. The goal, of course, is to make sure each person has the appropriate tools for their tasks. And, ideally, to make sure equipment doesn’t become a problem or barrier for people as they attempt to do their work.

Sometimes, you want to reduce the time people spend waiting for a system to complete a task. For example, a new system might compile code or process video faster than an older one. Some organizations will replace systems to maximize performance — and minimize wait times. Especially for highly paid employees, it can make economic sense to replace a device when a faster system becomes available.

SEE: Shut down: 10 tech and operational tips for closing a office or facility (free PDF) (TechRepublic)

If mobility is essential, it can make sense to replace gear to maximize usable time away from a plugged-in power source. Over time, the life of smartphone, tablet and laptop batteries tends to decline. The exact decline in performance varies by device and usage patterns. But a significant decline in battery performance may force people either to plug in devices often or to carry additional external batteries. Replacement batteries, depending on the device, can cost anywhere from $50 to around $200 or so. With this approach, you would replace mobile devices to optimize for a specified battery life (e.g., replace when a device battery no longer supports eight hours of disconnected use).

Device weight also might prompt you to purchase a new system, since sometimes newer devices weigh less than older ones. However, a more significant weight savings can be found by changing the type of device used. In other words, if tasks can be handled on a tablet instead of a laptop (or on a smartphone instead of a tablet), the move to a different class of device often delivers a more dramatic weight reduction than a switch from one laptop to another.

Replace on a standardized schedule

Many IT leaders replace equipment on a schedule. When you deploy a device, you also assign it an expected number of months (or years) to be in active use before you replace it. For example, you might plan to replace desktop computers every five years (or 60 months).

The number of years of active use, however, varies by device. As of late 2021, my standard suggested schedule is to replace smartphones every three years, laptops and tablets every four years, and desktops every five years. You might shorten the replacement cycle if your organization needs access to newer equipment. If you extend the cycle, you may increase the risk of device failures (e.g., storage or batteries) or employee annoyance with old or slow systems.

Some organizations prefer to use — and repeatedly repair — systems until the cost to repair a device would be more than either the value of the device or the cost of a replacement system. This approach often occurs in organizations where people use computers for fairly mundane tasks, such as email, web browsing and basic office applications. Speed and hardware improvements typically don’t matter much for these types of tasks. Instead, the organization seeks to minimize the amount spent on equipment and therefore keeps equipment in use as long as possible.

Nearly every organization should replace equipment when system and security updates for a device are no longer available from the vendor. At that point, unsupported systems can represent a security risk, since problems are no longer patched or fixed. Additionally, vendors often decline to repair or otherwise support discontinued products. While you may be able to find third-party options after a vendor ends support, the prudent path of action at this point would be to buy new equipment.

What device replacement strategies do you use?

Keep in mind that when you replace equipment, you may choose what generation of equipment to purchase. If you need to maximize performance, then you likely want the newest and fastest systems available. Typically, you’ll pay a premium for these. But an equally valid option for many people in an organization is to choose to buy a system one generation prior to the most recently released models (e.g., to buy an iPhone 12 instead of an iPhone 13). I recommend this approach only for devices that remain available for sale from the original vendor. (In other words, don’t buy discontinued models no longer available from the manufacturer.) Buying refurbished equipment that comes with support and warranties from the manufacturer is also an option to consider.

What criteria do you use to determine when to replace a phone, tablet, laptop or desktop? Does your organization replace devices on a standard schedule? Do the replacement plans at your organization ensure everyone has devices appropriate to their needs — or do people struggle with equipment that is no longer optimal for their tasks? Let me know what approach (or blend of approaches) your organization takes to replacing equipment, either with a comment below or on Twitter (@awolber).

Learn how to get the most out of Google Docs, Google Cloud Platform, Google Apps, Chrome OS, and all the other Google products used in business environments.
Delivered Fridays