When can the COVID-19 masks finally come off?

Amid the turmoil of the past two years — a period that included a deadly pandemic, mass layoffs, an ugly presidential election and an attack on the U.S. Capitol — some of the fiercest political debates in America have been waged over a nearly weightless piece of fabric: the face mask.

U.S. officials were slow to embrace face masks as a strategy for slowing the spread of the coronavirus. When they finally did, masks became a potent symbol of the pandemic — a common-sense public health measure turned political flashpoint and a visible reminder that life was anything but normal.

Now, with the summer’s delta surge in the rearview mirror and the vaccination of school-age children underway, many Americans are wondering when the masks might finally come off.

“The best science does support mask-wearing as a valid strategy to reduce COVID-19,” said Dr. Stephen Luby, an infectious disease expert and epidemiologist at Stanford University. “The issue is: Well, how long do we do this, and in how many contexts?” He added, “Do we all wear masks the rest of our lives?”

Some public officials are already mapping out an endgame. On Tuesday, Mayor Muriel Bowser of Washington, D.C., announced that indoor mask requirements would be loosened. The next day, Florida lawmakers passed a bill banning school mask mandates, which some districts had already abandoned.

That time has not yet come, experts said.

“Cases are starting to rise again, and we have not yet conquered this virus,” said Anne Rimoin, an epidemiologist at the University of California, Los Angeles. “We may be tired of COVID and COVID restrictions and public health measures, but this virus is certainly not done with us yet.”

The Centers for Disease Control and Prevention recommends that even fully vaccinated people wear masks in public indoor spaces where community transmission of the virus is “substantial or high.” Currently, roughly 85% of U.S. counties meet that threshold, which is defined as at least 50 new cases weekly per 100,000 residents.

It will be safer to ease mask requirements early next year, scientists said, after more children have been fully vaccinated and the holiday travel season has passed. And voluntary mask-wearing will continue to be helpful in certain circumstances, as well as in future cold and flu seasons, they noted. 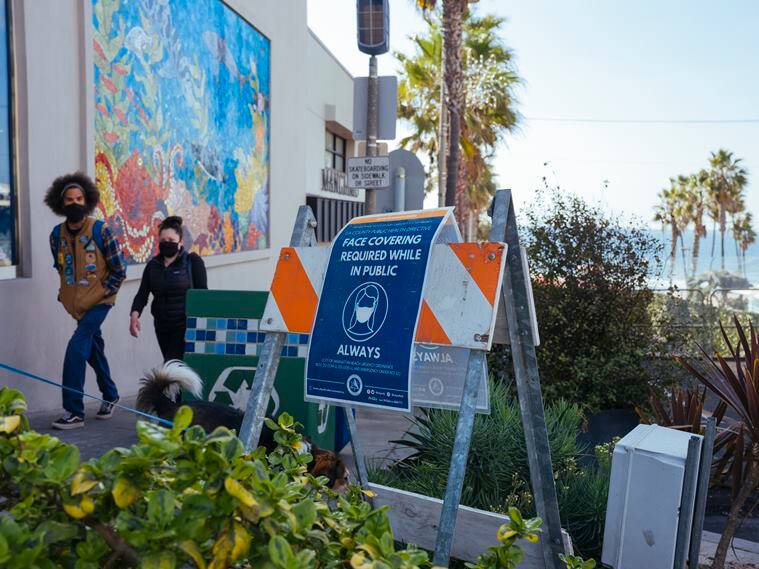 Signage encouraging masking in Manhattan Beach. Although the end of mask mandates is in sight, restrictions should remain in place through the holidays, experts say. (David Walter Banks/The New York Times)

“I don’t think we’re going to want to put all our masks away,” Luby said.

Several lines of evidence support the effectiveness of face masks as a public health intervention.

Laboratory studies have shown that even basic cloth masks can block more than 50% of small aerosols; surgical masks and N95 respirators are even better. And real-world research suggests that statewide and schoolwide mask mandates curb the spread of the virus.

A randomized trial, conducted by Luby and his colleagues in 600 villages in Bangladesh, demonstrated that a mask-wearing intervention, including the distribution of free masks and a multipronged messaging campaign, led to substantial increases in mask-wearing and declines in COVID-19 cases. (The study has not yet been published in a scientific journal.)

All of these studies have limitations, but together they, and many similar analyses, add up to a clear conclusion.

“There is an overwhelming amount of evidence that masks help slow transmission,” said Linsey Marr, an expert in airborne viruses at Virginia Tech.

Face masks are not without drawbacks.

“They impede communication,” Marr said. “They can be uncomfortable.”

Some people with disabilities may not be able to wear masks, and there is still debate over how to weigh the benefits and downsides of masking young children, who are much less likely than adults to become seriously ill from the virus. (The CDC says that children younger than 2 should not wear masks, while the World Health Organization recommends against requiring masks for children younger than 6.)

But given that most people tolerate masks well and that mask-wearing is far less disruptive than other mitigation measures like lockdowns, face masks are a key tool in managing the pandemic, experts said.

“I think mask-wearing is, in many ways, one of the interventions that you probably want to relax last,” said Richard Stutt, an infectious disease modeler at the University of Cambridge. “Mask-wearing is very, very low cost in comparison to most other interventions.” 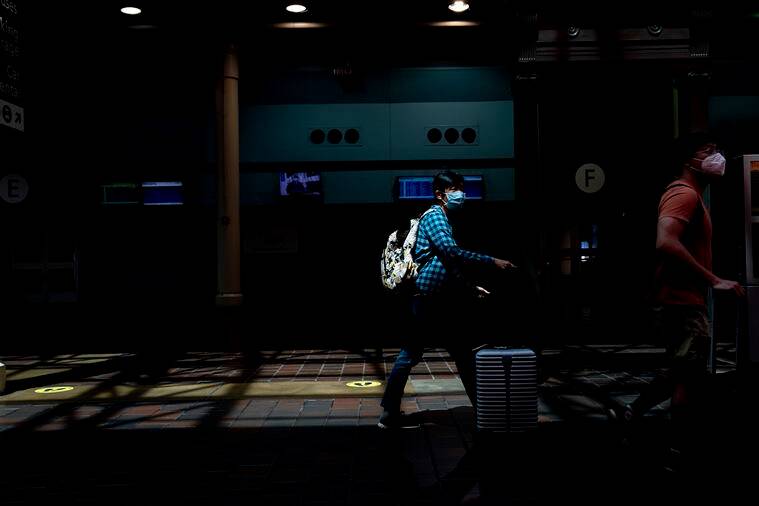 Travellers wearing protective face masks at Union Station in Washington. Some believe it could be safe to loosen mask requirements early next year — after more children have been vaccinated and the holiday travel season has passed. (Stefani Reynolds/The New York Times)

But mask mandates were never intended to last forever, and this fall, as cases dropped and vaccine eligibility expanded, some public officials began considering how to end them.

This month, the Los Angeles County Department of Public Health announced its criteria, including specific vaccination and transmission bench marks, for lifting some of its indoor masking requirements.

Gov. Phil Murphy of New Jersey recently said he hoped to lift the state’s school mask mandate “sooner than later” and floated the idea of eliminating the requirement in phases, beginning with high schools, whose teenage students have been eligible for vaccination for months.

“Now is not the time that I would reduce mask mandates,” Luby said.

Marr recommended not lifting school mask mandates until after the winter holidays had passed and more school-age children have had the chance to get both of their shots. If community transmission levels are low or moderate a few weeks after school resumes in January, then, “Yeah, let’s get rid of the masks,” she said.

Seema Lakdawala, a respiratory virus expert at the University of Pittsburgh, imagined a similar timeline: “Maybe in February, we can say goodbye to masks.”

Other experts were reluctant to provide a date. Rimoin said she would like to see a more sustained reduction in cases and deaths before easing mask requirements.

“We’re still seeing 1,000 people dying a day from this virus,” she said. “It’s not just a matter of comfort and ease — I mean, this is a matter of life or death for many people.”

Easing mask restrictions will need to be a local decision, scientists stressed, based on a complex set of factors including local transmission and vaccination rates, and the vulnerability of the population in question. 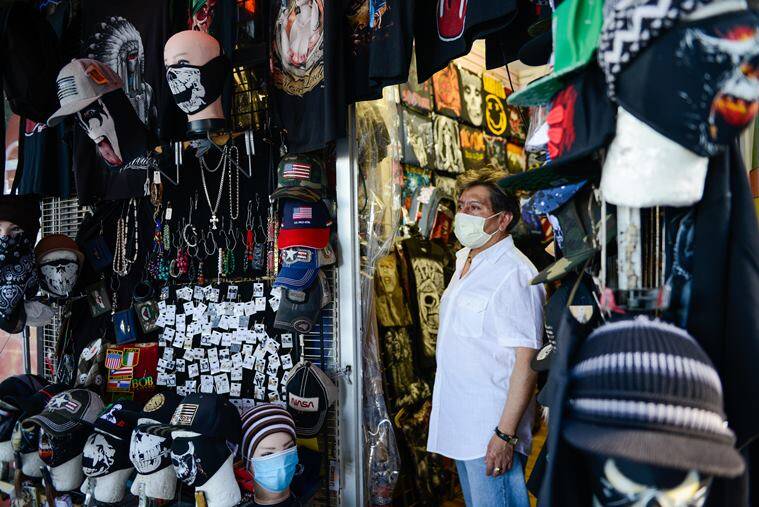 “If a region or particular community is having an outbreak, then I think it would make a lot of sense for people within that community to be wearing masks even if, nationally, things are fairly under control,” Stutt said.

And mask-wearing is not all-or-nothing. Even after mandates are lifted, it will make sense for some people — older adults or those who are immunocompromised, for instance — to wear masks in certain circumstances and settings. And people should be prepared to put masks back on in the event of future surges, scientists said.

Experts also expressed hope that new mask-wearing norms might outlast the pandemic. Face masks could help reduce transmission of other respiratory viruses, and experts said that they planned to continue wearing masks in some environments, such as on planes and buses, during future flu seasons.

“Before the pandemic there was a stigma associated with wearing masks in this country, but I think it’s become normalized in a lot of places,” Marr said. (Still, she acknowledged, “I think others will never wear a mask again.”)

Lakdawala expressed hope that as other pandemic restrictions eased, people might find a brief period of mask-wearing, in certain high-risk situations, less onerous.

“Hopefully as people become more comfortable with vaccination and realize that they can see their friends and family and they can go and do their normal activities in a safe way, wearing a mask on a bus for the 20 minutes you need to ride it to work isn’t seen as a burden,” she said. “It’s seen as a way to protect yourself and your family.”

This article originally appeared in The New York Times.