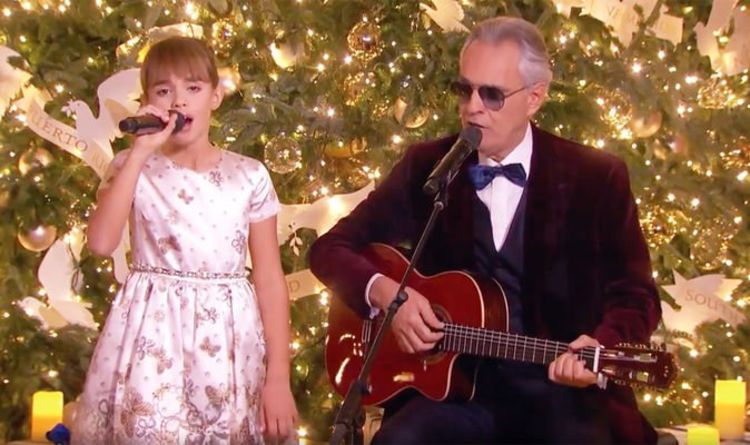 Little Virginia became a worldwide sensation last Christmas during lockdown when she appeared alongside her father on his streamed concert. Since then, she has accompanied Andrea on his resumed North American leg on his current world tour. Every night, the nine-year-old stands up in front of thousands of people with a composure far beyond her years. But now she has sung in front of the most powerful man in the world in the most famous house in the world.  SCROLL DOWN TO WATCH THE INCREDIBLE WHITE HOUSE PERFORMANCE

The concert took place last night and was broadcast on the US channel PBS. UK and world viewers sadly can’t see the full broadcast. However, Andrea posted a beautiful video of him singing at the White House with Virginia for their fans to enjoy.

The song they are singing is, of course, Leonard Cohen’s Hallelujah, just as they did last year in the broadcast from the Teatro Regio di Parma. As always, Andrea accompanies their voices on the guitar.

During the night, Andrea also sang with his youngest son Matteo and he has also posted a video of them performing O Holy Night. SCROLL DOWN TO WATCH ANDREA SINGING WITH VIRGINIA AND MATTEO.

READ MORE: Andrea Bocelli: Veronica explains how it works as his wife AND manager

Andrea added: “Taking part in such a vast tribute to beauty at the White House, a place so rich in meaning, replenishes me, reminding me that art is always a gift from the Heavens to elevate the spirit. Miracles come from on high, but good works and virtuous choices come from the efforts of humanity. By helping us to imagine the kind of ideal world we’d all like to live in, art can be an invaluable advisor and a great source of support. We must all do our part to make that world a reality.”

Not only is Andrea the world’s best-selling tenor, his children are fast following in his superstar footsteps. Young Virginia is continuing with her school studies while she is on tour, accompanied by her mother, Veronica Berti.

Matteo, however, is currently launching his own solo career. His debut solo single, Solo, was released in September and he has just confirmed that the follow-up will be released on January 14. There is still no date for the album.

UK fans can also catch Andrea, and hopefully Virginia and Matteo, when the tour reaches our shores next September.