War In Ukraine: Russia Is Not A ‘Most Favored Nation’. What Now?

And the U.S. is cutting the flow the other way, too: It’s barring the export of expensive watches, cars, clothing and other luxury American products to Russia.

Congress is expected to act swiftly to pass legislation to formalize the downgrade of Moscow’s trade status. The U.S. revocation of Russia’s long-standing most favored trade status is only the latest in a series of economic and financial sanctions that have been leveled against Russia in response to its brutal war against Ukraine.

By itself, the downgrade of its trade status won’t have an immediate far-reaching effect on the Russian economy. But combined with the other sanctions the United States and its allies have imposed, the idea is to intensify the pressure on President Vladimir Putin and force a pullback of his Russian forces. Here is a deeper look:

WHAT IS ‘MOST FAVORED NATION’ STATUS?

The idea behind MFN status is to equalize the trade treatment in tariffs and other terms of all of a country’s trading partners. Say, for example, that the United States levies a 13% tariff on imported leather gloves. MFN status means that gloves imported from France, China, Brazil and Russia would all be taxed at that same rate.

MFN status has been a baseline for global trade, ensuring that countries within the World Trade Organization are treated on a similar footing, with some exceptions that allow, for example, preferential treatment for developing countries.

Over the years, the U.S. has revoked the MFN status of more than two dozen countries — generally for political reasons, with the Cold War bringing the sanction against the then-Soviet Union and other communist countries, for example.

With the exception of Cuba and North Korea, the preferred status of those nations was eventually restored. This was done, for example, after the thaw of the Cold War in Eastern Europe and the opening of U.S.-China relations after the visit of President Richard Nixon. With this latest move, Russia will join the ranks of those two communist countries in lacking MFN status with the U.S.

WHAT ABOUT REAL IMPACT VS SYMBOLISM?

For the U.S. at least, removing most favored nation status is a mostly symbolic gesture. The U.S. ban that was announced this week on imports of Russian oil, gas and coal already eliminated about 60% of all U.S. imports from Russia. The new import bans announced Friday add up to only about $1 billion in revenue, according to White House figures.

Russia provided less than 1% of all U.S. vodka imports in December, according to the Distilled Spirits Council of the United States, and less than 2% of U.S. seafood imports by volume, according to federal statistics.

But symbolism can be important in war.

“Putin is an aggressor,” Biden said from the Roosevelt Room of the White House. “And Putin must pay the price. He cannot pursue a war that threatens the very foundations … of international peace and stability.”

Russia widened its offensive in Ukraine on Friday, two weeks after the invasion began, striking airfields in the west and a major industrial city in the east. A huge armored column that had been stalled for over a week outside Kyiv was on the move again, spreading out near the capital. 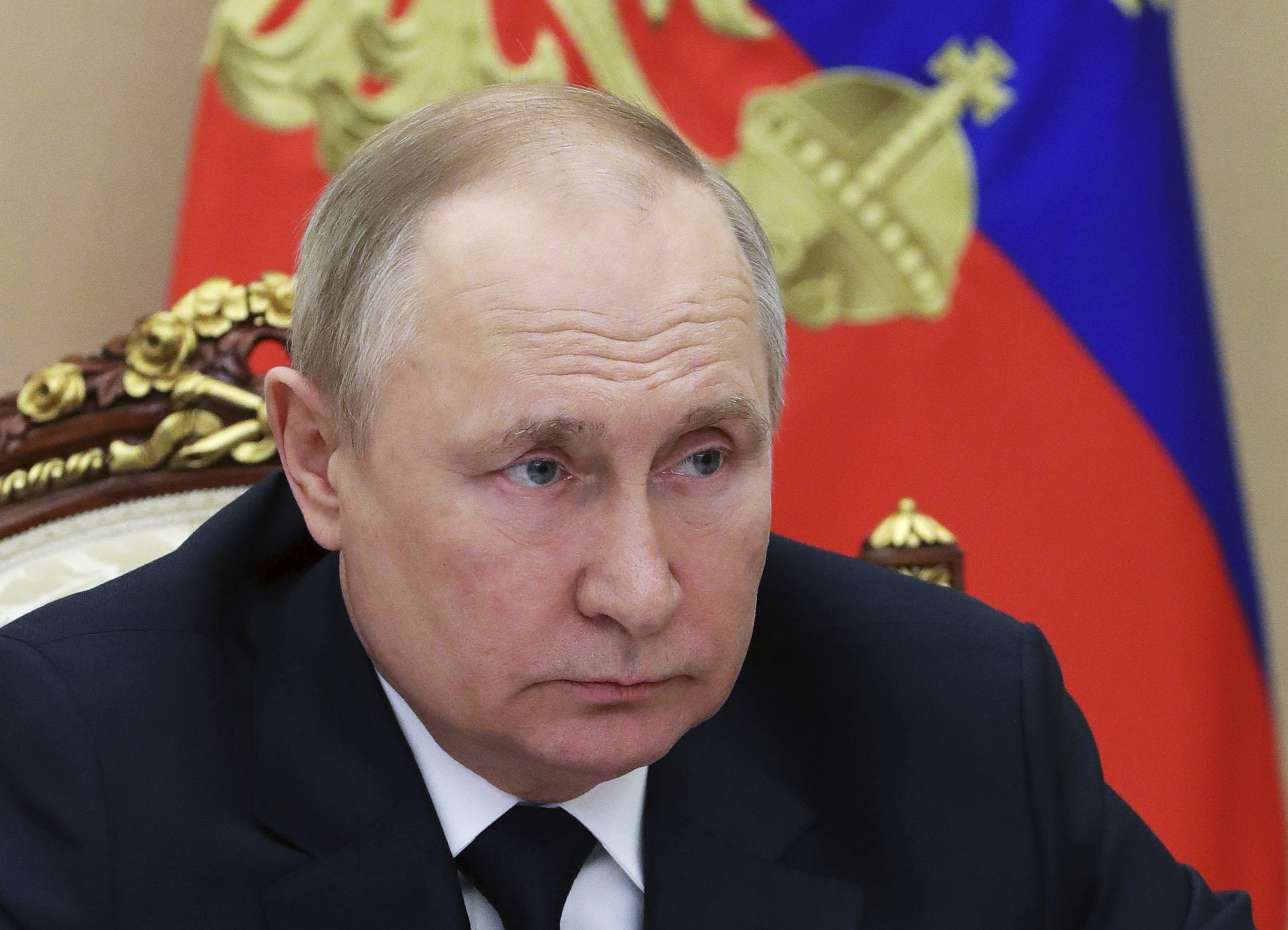 Russian President Vladimir Putin chairs a meeting with members of the government via teleconference in Moscow, Thursday, March 10, 2022. (AP Photo)

DIAMONDS, VODKA, KING CRAB. WHAT ELSE DOES THE U.S. IMPORT FROM RUSSIA?

The U.S. buys mostly natural resources from Russia for which existing tariffs are mostly low or zero — oil and metals such as palladium, rhodium, uranium and silver bullion. Imports also include chemical products and semi-finished steel products, plywood and, paradoxically, bullets and cartridge shells.

Because the imports from Russia are mostly natural resources, they generally will face little to no increase in tariffs as a result of the lost MFN status, Ed Gresser, director for trade and global markets at the left-leaning Progressive Policy Institute, noted in an online posting.

To replace the current tariff rates, U.S. buyers of Russian goods would pay import taxes established under a 1930 U.S. law that disrupted trade during the Great Depression. It would still be zero for the metals. But the rates would soar — to levels considered punitive — for unwrought aluminum, plywood and semi-finished steel, among other products.