The absence of directional conviction may reflect an unwillingness to commit one way or another as key data driving the outlook for Fed policy – a key catalyst across global financial markets – prepares to cross the wires. Today the spotlight falls on June’s US ADP employment data

This private-sector jobs growth estimate will preview the much-anticipated release of official labor market figures on Friday. It is expected to show that job creation slowed last month, with the economy adding 600k jobs following a 978k rise in May.

The critical consideration at play may be whether any slowdown in hiring is judged as owing to qualified worker shortages – an inflationary influence – or slowing demand. The former scenario may be supportive of the US Dollar against its top counterparts, while the latter may see it backtrack somewhat.

The New Zealand Dollar has slipped back below the 0.70 figure after recoiling from support-turned-resistance in the 0.7070-97 area. Sellers now aim to target the familiar bottom in the 0.6923-43 zone. A daily close below that may set the stage to challenge the 0.68 handle. Reclaiming a foothold back above 0.70 may put resistance near 0.71 into play once more, with a secondary barrier in the 0.7138-43 band following thereafter. 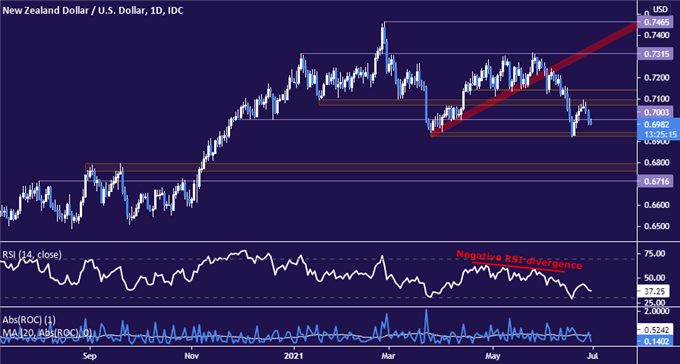