US Dollar Looking for a Lifeline in PCE Inflation Data

The US Dollar was not particularly stirred as second-quarter GDP registered lower than expected yesterday. The report showed output grew at annualized pace of 6.5 percent in the three months through June, whereas analysts were penciling in a reading at 8.5 percent.

Perhaps the market is still digesting the guidance from July’s FOMC policy announcement. As noted previously, the subsequent price action spoke to a broadly “dovish” read but the substance of the Fed’ narrative seems to reflect policymakers cautiously acclimating markets to on-coming stimulus withdrawal.

With that in mind, traders may be reluctant to show directional commitment as the spotlight turns to June’s PCE data. The Fed’s favored inflation gauge is expected to put price growth at 3.7 percent on-year, the highest in three decades. Pricing data has tended to beat forecasts recently, opening the door for an upside surprise.

An outsized increase may conjure up the specter of ‘stagflation’, where growth rates normalize down as the recovery from Covid lockdowns matures but inflation turns out to be sticky. That may sour sentiment as markets ponder the Fed policy challenging inherent to such a scenario, offering USD renewed support.

The Australian Dollar continues to hover at support-turned-resistance in the 0.7384-0.7413 area, a barrier reinforced by a falling trendline defining the down move since mid-June. A large Head and Shoulders top carved out from the start of the year hints at a broadly bearish bias.

The first major layer of support seems to be in the 0.7222-44 zone. A break below that confirmed on a daily closing basis may set the stage for the downtrend emanating from the H&S pattern to resume. That setup implies an approximated measured move down to the 0.7120-30 region.

Establishing a foothold above the 0.7413 seems to be a pre-requisite for neutralizing immediate selling pressure. That might begin a recovery that puts the 0.76 figure within buyers’ reach. A clear-cut invalidation of the near-term downtrend is needed to draw firm conclusions however. 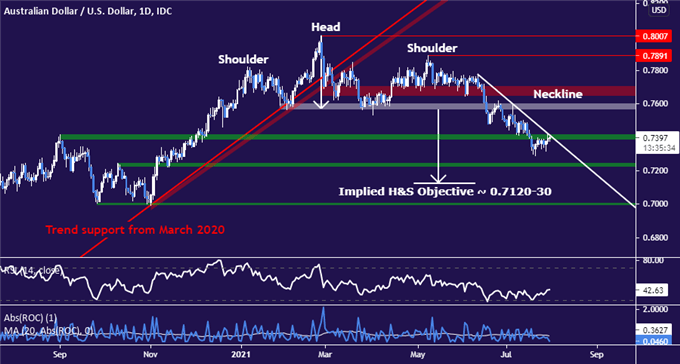