Asian equities were mostly higher today, led by Japanese stocks rallying in the aftermath of

Polls had the government lagging and concerns were apparent for a minority government that would struggle to push through recovery spending packages. With the win, the market sees the LDP opening the purse strings to stimulate the economy.

The Yen weakening on the election result saw USD/JPY move higher. The US Dollar has held onto gains seen on Friday in most currency pairs, thanks in part to month end flows. The Fed meeting on Wednesday could see a pick-up in volatility for the US Dollar.

The British Pound will also be in focus ahead of Thursday’s Bank of England meeting, where it is expected that the bank will launch into tightening mode.

The risk-on environment was aided by the Nasdaq 100 and S&P 500 making new all-time highs on Friday.

However, Hong Kong and Chinese stocks were lower after disappointing data over the weekend. The China manufacturing purchasing managers index (PMI) fell to 49.2 for the month of October from 49.6 in September, missing market forecasts of 49.7.

Higher energy prices, blackouts and lockdowns appear to be taking a toll. Iron ore prices continued to push lower. Crude oil was slightly softer to start the week, as attention will turn to the OPEC+ meeting that will take place on Thursday.

The bond market rout that rocked Australian fixed interest last week, recovered somewhat today. The sell-off was a result of the RBA appearing to let go of yield curve control prior to their monetary policy meeting tomorrow. Despite the positive tone in markets, AUD/USD went lower today.

It is big week of central bank meetings with the RBA tomorrow, the Fed on Wednesday, and the Bank of England on Thursday. In the US today, there will be the release of ISM, PMI and construction spending data.

The US Dollar remains within an ascending trend channel that started in June. The 21-day and 55-day simple moving average (SMA) appear to have some technical contribution.

At the end of last week, DXY moved down toward the 55-day SMA and twice bounced off this SMA. It then moved up through the 21-day SMA, an SMA that has previously offered some resistance. These 2 SMAs might provide support for the US Dollar along with the lower bound of the trend channel. 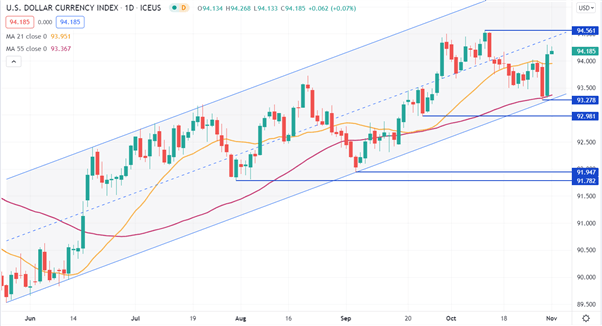