US Dollar a Focal Point with USD/CHF Approaching Resistance Levels

The USDollar remains a focus for markets as a healthy appetite for risk from Wall street failed to materialise into higher levels for risk assets in the Asian session, with most equity indices settling back to levels that they were before the release of US CPI in the session just prior. Currency, commodity and bond markets were also left to ponder the bigger picture, as they too retreated to levels seen just before US CPI release.

With little in the way of data released today, the focus for markets remained on the central banks around the world and their ability to withdraw stimulus without disrupting market confidence. The Fed in particular, will remain in the spotlight with several board members this week expressing more hawkish attitudes than indicated in the most recent FOMC statement of late July.

USD strength across the board continues to be a theme that traders are getting more comfortable with. Any further commentary from Fed board members will be closely monitored and market reactions will be the key to future direction for many markets. While other central banks have leaned into a more hawkish stance, the Fed appears to be waiting for market approval before pulling the trigger. We are unlikely to get any official change in the Fed stance until later this month at the Jackson Hole Symposium.

After the release of UK GDP figures, the European session is likely to look to the US open with only second and third tier data releases to look for any clues for market direction.

The continuation of CHF depreciation earlier in the week has been consolidated in the Asian session as it approaches important levels in both USD/CHF and EUR/CHF. The topside level to watch in USD/CHF is 0.9275 while near term resistance in EUR/CHF is at 1.0870. A breach higher in these markets would suggest further CHF depreciation is possible. 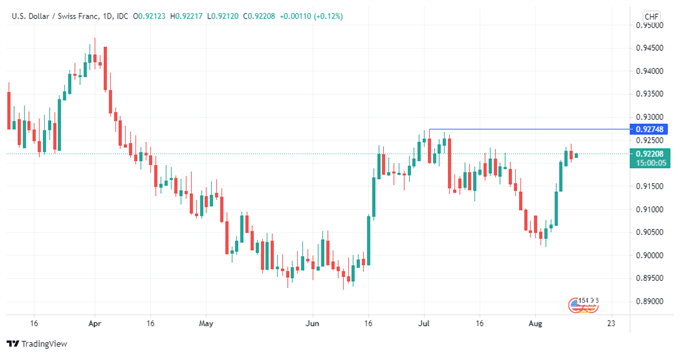