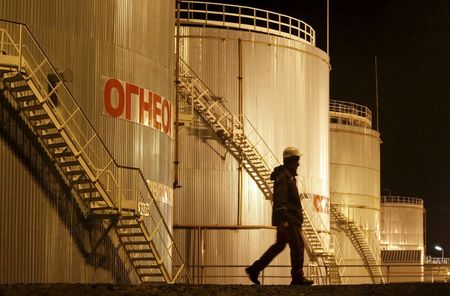 Investing.com – US.. oil prices hit their highest since 2018 before sliding on Wednesday as the government reported a mammoth weekly build in gasoline and diesel stockpiles amid a ramp-up in output by refiners anticipating runaway demand for fuels this summer.

rose by 7.05 million barrels during the week ended June 4, the Energy Information Administration said in its Weekly Petroleum Status Report. Analysts tracked by Investing.com had forecast a build of just 1.2 million barrels.

fell sharply too, by 5.2 million barrels versus forecasts for a 3.5 million-barrel decline. But that was only because of the ramp up in fuel production due to a spike in refining activity.

The EIA said refinery runs rose by 2.6 percentage points to 91.3% last week, the first time they had run above the key 90% threshold for months. Clearing that bar was somewhat a vindication for oil bulls betting on upcoming demand for fuels in the summer months.

Analysts have projected one of the biggest ever summer demand periods for fuel in the U.S. as the economy reopens fully from a year of lockdowns and safety measures imposed after the March 2020 outbreak of the coronavirus pandemic.

“Refineries are running flat out to build inventories ahead of summer driving season,” economist Adam Button said in a post on ForexLive. “There is already talk of heavy traffic on the roads.”

Sophie Griffiths, head of UK and EMEA research for online broker OANDA, said WTI and Brent appeared poised for more gains in the coming weeks after OPEC+’s apparent success in getting the market to accept a hike in production through July.

U.S. Secretary of State Antony Blinken also provided more support to the market by saying hundreds of Treasury Department sanctions were expected to remain on Iranian oil even if Tehran managed to strike a new nuclear deal with world powers to legitimately put its crude exports back on the world market.

The oil rally had been somewhat held back in recent weeks by concerns that Iran could put some 2 million additional barrels on the market in the course of the next few months.