In a major setback to the Imran Khan-led government, the Supreme Court of Pakistan on Thursday ruled that the National Assembly must reconvene to hold a no-trust vote against the embattled Prime Minister. The apex court said a decision by the National Assembly Deputy Speaker Qasim Suri to not allow a no-confidence vote on Sunday (April 3) “is declared to be contrary to the Constitution and of no legal effect, and is set aside”. The court ordered the Speaker to call the session of the assembly on April 9 at 10 am (local time) to organize the vote on the no-confidence motion. It ordered the election of a new PM if the no-confidence motion succeeded. 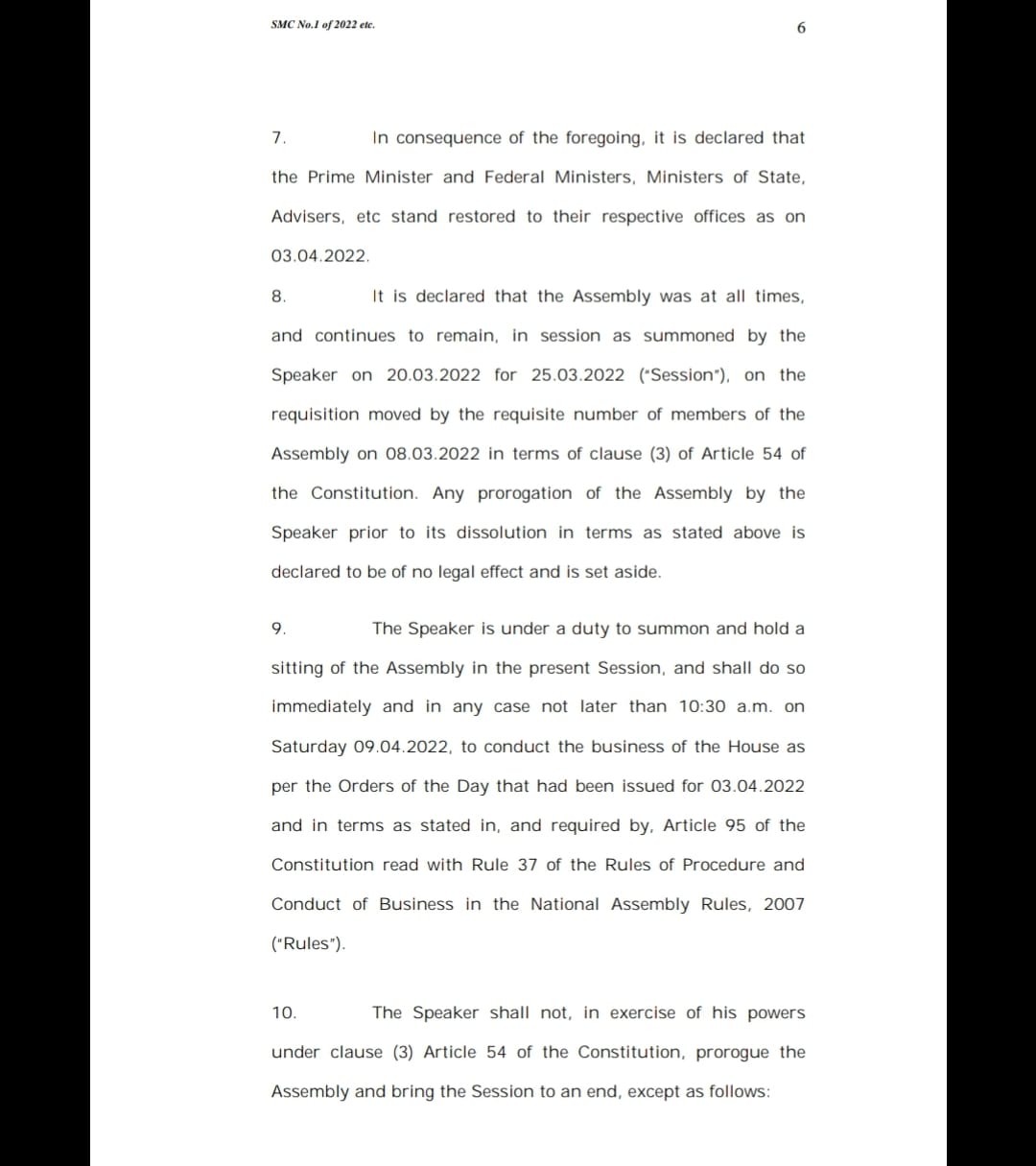 After the verdict, Khan said a cabinet and Parliamentary party meeting will be held on Friday and he will address the nation in the evening. “My message to our nation is I have always & will continue to fight for Pak till the last ball,” he said on Twitter.

I have called a cabinet mtg tomorrow as well as our parl party mtg; & tomorrow evening I will address the nation. My message to our nation is I have always & will continue to fight for Pak till the last ball.— Imran Khan (@ImranKhanPTI) April 7, 2022

The verdict comes days after Suri, who is associated with Khan’s Pakistan Tehreek-e-Insaf (PTI) party, ordered that the no-confidence motion against the 69-year-old leader was linked with the “foreign conspiracy” to topple his government and hence was not maintainable. Within minutes, President Arif Alvi dissolved the National Assembly on the advice of the Prime Minister who had effectively lost the majority.

The joint Opposition then appeared before the Supreme Court, which took suo moto of the petitions and heard the matter.

In a unanimous verdict announced today, Chief Justice Umar Ata Bandial, who was heading a five-member bench comprising Justices Ijazul Ahsan, Mohammad Ali Mazhar Miankhel, Munib Akhtar, and Jamal Khan Mandokhel, declared the controversial ruling by Deputy Speaker Suri and the dissolution of the Parliament “unconstitutional”. “The deputy speaker gave a ruling on April 3. Leave was granted on the no-confidence motion on March 28. The ruling of the speaker is declared unconstitutional,” Chief Justice Bandial ordered.

Security was beefed up around the court premises and riot police were deployed outside the court ahead of the verdict. During the hearing, Chief Justice Bandial noted Deputy Speaker Suri’s ruling is, prima facie, a violation of Article 95.

Apart from lawyers representing various political parties, the court also called at the PML-N chief and main Opposition leader Shehbaz Sharif and asked about his views on the way forward in the wake of the crisis in the country due to dissolution of assembly and announcement of fresh elections. Shehbaz said how the Opposition leaders can take part in the polls after being called as “traitors”. He left it to the court to decide but urged that rule of law should be adhered to and added, “we cannot face even our families after being called as traitors”.

He was referring to the ruling by the Deputy Speaker Suri that the no-trust vote was linked with a so-called “foreign conspiracy”.

Calling the decision by the apex court “historic”, Shehbaz, after the verdict, said, “The court has strengthened its prestige and independence through this verdict. The court also strengthened the Parliament and its honor.”

Addressing a presser after the verdict, PPP Chairman Bilawal Bhutto-Zardari said, “This verdict is in favour of the people. This verdict will be written in golden words.”

Maulana Fazlur Rehman, chief of Jamiat Ulema-i-Islam Fazl (JUI-F), also welcomed the court’s order and told press conference that it is a victory of justice and the Constitution. “Tomorrow will be observed as thank-giving day,” he added.

(with inputs from PTI)