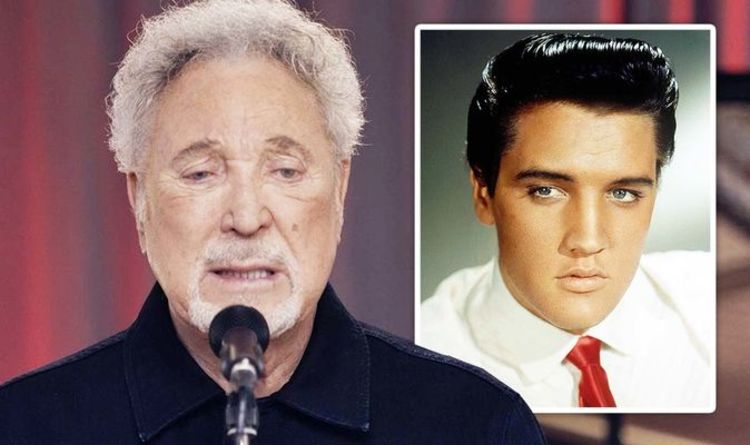 The Sex Bomb star modelled himself as a “Welsh Elvis” during his rise to superstardom in the Sixties. Born in Treforest, Pontypridd, a small coal-mining town, Sir Tom was one of few UK artists to break into the US. There he rubbed shoulders with his idol and other legendary singers including Frank Sinatra and The Supremes.

Like much of the world at that time, Sir Tom was a huge fan of Elvis, the man forever known as The King Of Rock And Roll.

The meeting of the two musical titans came in 1965 when the Welsh singer and his band The Squires were performing a residency in Las Vegas.

Vernon Hopkins, his former bass player, told Express.co.uk that Elvis snuck into one of their evening performances to watch the show.

He claimed The King kept a low profile to avoid being spotted and mobbed by legions of adoring fans.

Tom Jones, Priscilla Presley and Elvis Presley during the first time they met in Las Vegas, in 1965 (Image: GETTY)

However, when Sir Tom announced Elvis was in the building, the crowd went nuts.

Mr Hopkins recalled a spotlight slowly circling the room before shining down on the Hound Dog crooner.

He told Express.co.uk: “It was mayhem… all the screaming, the cheering and clapping, it was incredible.”

Tom Jones with The Squires, The Voice star’s first band, before they split in the late Sixties (Image: VERNON HOPKINS)

Sir Tom and the band, who were waiting to perform the rest of the show, started to “get a bit on edge”.

Mr Hopkins urged the singer to quell the excitable crowds and claimed he would “never forget” the words Sir Tom uttered to do so.

The musician told Express.co.uk: “He went, ‘Ah, ah, ah! Hold on, hold on, hold on everybody… Calm down, don’t forget I’m the star tonight!’”

After the show, Elvis and Sir Tom finally met and according to Mr Hopkins hit it off straight away.

Tom Jones and The Squires rose to superstardom after the release of It’s Not Unusual in 1965 (Image: GETTY)

Mr Hopkins recalled watching “animated conversation” between them, while he eagerly waited to meet The King himself.

In a 2019 video for Right Recordings, Mr Hopkins recalled her “alabaster-white” skin, which contrasted with her “jet-black hair” and made her “look even whiter”.

After “quite a while”, Sir Tom called his bandmate over to finally meet Elvis.

Tom Jones and The Squires rose to fame in Wales before becoming international hits in the US (Image: VERNON HOPKINS)

The It’s Not Unusual hitmaker described Mr Hopkins as someone who had been there “right from the very beginning in South Wales”.

The guitarist was speechless and amazed that such an internationally renowned star would show so much respect to someone he didn’t know.

Elvis shook his hand and praised Mr Hopkin’s performance during the song Land Of A Thousand Dances.

Mr Hopkins recalled: “I said, ‘Thanks very much’ and then, as I remember, Elvis was scratching his head.

“He said, ‘I can’t win, you know, I’ve ordered all this gear I’m wearing from Carnaby Street, in London, because I knew you guys were [from the UK].”

Elvis told him that with a band name like “Tom Jones and The Squires” he expected them to “be dressed all modern and everything”.

However, when The King met the Welsh band he was truly surprised.

Elvis told Mr Hopkins: “Here you are, you’re in here with t-shirts and sneakers and looking all American… Man, I can’t win you know!”

Sir Tom’s friendship with Elvis flourished after that day.

Priscilla claimed she “never saw Elvis so happy in the company of another man” as when he was with the Welsh singer.

In 2011, she told the Daily Mail that they were “like a couple of schoolboys” whenever they hung out together.

Their friendship was sadly cut short when Elvis suffered a fatal heart attack in 1997 at the age of 42.

Vernon Hopkins’ memoir Just Help Yourself: Tom Jones, The Squires And The Road To Stardom was published in 2012 by Seren. You can buy the book here or listen to it in audiobook format later this year.