“That’s It, I’m Taking A Flight,” Wrote Ranveer Singh After Seeing Deepika Padukone’s Pics And He Did

Deepika Padukone and Ranveer Singh are legit couple goals. The actress, busy with her jury duties at the ongoing Cannes film festival, has actively been sharing pictures of her OOTDs on Instagram. She shared a picture of the red Louis Vuitton outfit that she wore to the red carpet last night and stunning can’t even begin to describe the pictures. Meanwhile, her husband Ranveer Singh, who has been saving his mushy comments for a while now, wrote this on her post: “Killing me.” A few minutes later, he dropped another comment that read: “Ok! That’s it! I’m taking a flight.” When Ranveer Singh said, he is taking a flight, he legit did. The actor was pictured at the Mumbai airport earlier. Talk about couple goals. 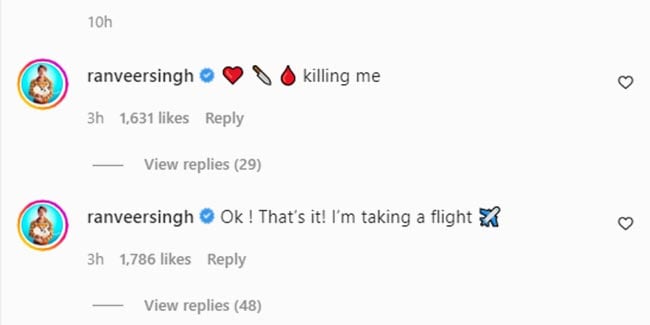 Earlier, the actor was pictured at the Mumbai airport.

Besides LV, the actress wore a Sabyasachi ensemble for the opening ceremony. She paired a printed shirt with a emerald green pants. Later that night, she wore a saree, also by Sabyasachi.

About Deepika Padukone’s off-red carpet Cannes looks, the actress has been swearing by Louis Vuitton all the way (no surprises there, given she is the brand’s ambassador). She checked into the French Riviera, dressed in a denim-on-denim look. An LV bag on the side and some glasses. Documenting the moments, the actress shared a video on Instagram, which she signed off with the words: “From Cannes, With love.”

Deepika Padukone, has been a regular at Cannes for the last few years. For years, she had been representing make-up giant L’Oreal at the film festival. Deepika has made it to best-dressed lists the last three times she’s been at Cannes and has worn designers such as Prabal Gurung, Marchesa, Peter Dundas, Giambattista Valli and Ashi Studio.

Deepika Padukone and Ranveer Singh got married in a traditional South Indian ceremony – per Konkani rituals in 2018. They also had a North Indian wedding. The couple had an intimate destination wedding in Italy’s Lake Como with only close friends and family in attendance. They later hosted grand receptions in Bengaluru and Mumbai.

Deepika Padukone and Ranveer Singh’s first film together was Goliyon Ki Rasleela Ram-Leela (2013), which was directed by Sanjay Leela Bhansali. The couple has also co-starred in Bajirao Mastani and “Padmaavat.” The couple also shared screen space in Kabir Khan’s sports drama ’83. Both the stars have super busy schedules ahead.