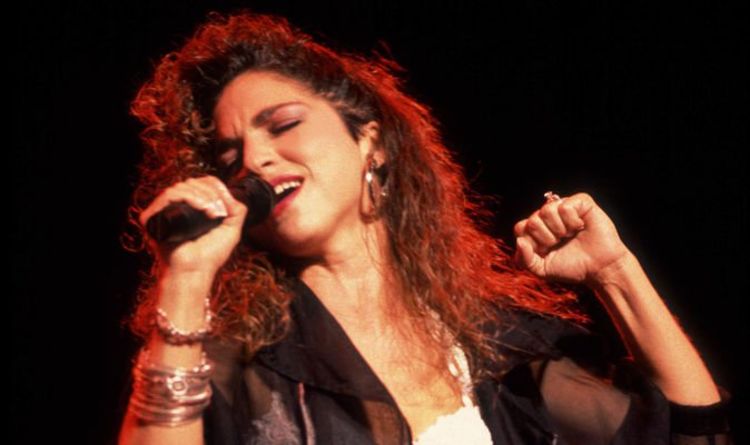 And that certainly strikes a chord with superstar singer Gloria Estefan, who remembers his tunes from her early years in a migrant family in the United States, having fled Fidel Castro’s Communist Cuba. And it’s one of the reasons she finds it so special to be a guest artist on a new album – A Sentimental Christmas with Nat King Cole and Friends – which reimagines duets with the legendary crooner. It also features collaborations with John Legend and Johnny Mathis.

Cole, who died in 1965, still has a place in her heart to this day. She explains: “When my family escaped from Cuba after the revolution, my grandmother would smuggle mom’s record collection to us in Miami in boxes of baby food.

“She’d go to the airport and say to the pilot, ‘Please, give this to my daughter at this address.’ Then there would be a knock at the door and there was the pilot with the box of baby food. In the box were some records including Nat King Cole albums, which would soothe me as a baby.

“As I got older, he was the soundtrack of my childhood – I’ve always been a huge fan. When he sings, he makes you feel that anything is possible, life’s ahead of you.

“While I was recording it I was imagining us in a little club, him at the piano and me, really trying to connect to him in the song, A Nightingale Sang In Berkeley Square. It was very special.

“He is one of my musical heroes. So when I got invited to be on the album, I thought, ‘Wow!’”

Gloria became a star in the 1980s with her unique brand of pop.

She’s had people running to the dance floor for decades, since she was lead singer of Miami Sound Machine and the song Conga hit the airwaves in 1985.

She has won three Grammys, sold 100 million records and enjoyed 38 Number 1 hits – with songs including Rhythm Is Going To Get You, Dr Beat and Get On Your Feet.

At 64 she is still making music and as proof of her iconic status, she was invited to play at last year’s Glastonbury Festival, before it was cancelled. She says: “They asked me to do it when I was over there when my musical On Your Feet! opened in London [in 2019]. But then the festival got cancelled.

“It would be awesome to do that show and I think audiences would love what I’m planning to do. We’ll see. Never say never.”

The singer has come a long way from her origins. Born in Havana, her parents fled Cuba after Castro came to power in 1959.

Her father took part in the Bay of Pigs invasion, a failed landing operation in 1961 by Cuban exiles who opposed Castro’s Revolution.

Gloria herself is persona non grata in Cuba for speaking out about the government and has not visited since 1979. Talking from her mansion in Miami Beach, she says: “Pope John Paul II invited me to go on his trip in 1998, but it would have been too political. He was on a spiritual mission.”

While Hollywood has used her music in dozens of movies, Gloria has rarely made the jump to the big screen. But she reveals she has just finished filming a Cuban-American reboot of the movie Father Of The Bride with Andy Garcia, in which she plays his wife.

“That was incredible. We spent two months in Atlanta shooting. We really gelled.”

She muses: “What I have done in my life is far beyond my wildest dreams. Although we lived in Miami, I was raised Cuban because the whole plan was to go back.

“I was raised with Cuban traditions, Cuban food, Cuban music playing, and a lot of other music too, because my mother sang beautifully. She was very musical – I inherited it from her.

“I feel blessed to be able to continue doing what I do. I would have been happy being a psychologist – I was studying at the University of Miami before this.”

She continues: “It’s all about connection. I don’t need to be on stage all the time, I don’t want to be on tour like before – I’d miss my grandson Sasha too much. It was great at the time, but now I do little things.

“During the pandemic I wrote a ballad called We Needed Time about my son Nayib. We filmed the video and captured everywhere empty. I released an album, Brazil305, which was re-recorded versions of my greatest hits with Brazilian rhythms, especially samba. I was busy!

“Singing is part of me, being in the studio is my oxygen.”

Her singing career started to take shape when she met Emilio Estefan, her future husband, at a mutual friend’s house. She recalls: “He played his accordion for us and I was mesmerised. I joined his band The Miami Latin Boys and we started dating a year later. We fell in love and got married in 1978. The band Miami Sound Machine started growing with our Latin pop songs.”

Her relationship with Emilio, 68, has endured for almost 45 years. A successful record producer and songwriter, he is credited with paving the way for the crossover explosion of Latin music in the late 1990s, mostly through artists he himself brought to the forefront, including Ricky Martin, Jennifer Lopez, Shakira and Marc Anthony.

He is also hands-on in the couple’s business ventures, including several Cuban-themed restaurants in Miami Beach.

She smiles: “He has his space and I have mine, because we do different things. I feel very lucky.

“Emilio still makes me laugh even after all these years together.”

When she was growing up life was not always easy. Her father joined the US Army and was deployed to Vietnam, where he was exposed to toxic chemical Agent Orange. He returned weakened and was diagnosed with Multiple Sclerosis.

She says: “When I came home from school, I would take care of my dad because we could only afford a nurse during the time I was in school. Music was my escape. My dad was only 47 when he died.

“In 2015 Emilio and I received the Presidential Medal of Freedom from President Barack Obama. My father would have been so proud, because he brought me to the States to raise me in freedom.”

She broke her back in March 2000 when an 18-wheeler rear-ended her tour bus: “I couldn’t walk temporarily, but a team of surgeons and back surgery saved me. They put me back together. It was a life-changing experience – a ‘before and after’. I wouldn’t want to go through it again, but I wouldn’t change it. It made me stronger and learn a lot of things.”

“My grandson Sasha, who is eight, calls me Tutu – Hawaiian for grandma. It broke my heart when I couldn’t see him in the pandemic.

“I even put on a Hazmat suit so I could hug him and he hugged me back so tight. It’s special being a grandparent.

“The separation from family was tough for me, but to be honest, the rest I loved. I love my house and didn’t mind being forced to be here.”

This year Christmas will be spent at home: “We cook Cuban! My family isn’t that big but we extend it. In Latin families we venerate our elders and keep them close.”