It’s been almost a week that the tension between Russia and Ukraine has been going on. While several celebrities have shared their opinions on the ongoing crisis, music icon Madonna also used her social media power to amplify the voice of the victims. Taking to her Instagram stories, Madonna shared a video showing the rampant destruction in Ukraine. Sharing the video, Madonna wrote, “Stop the Devastation of Ukraine. STOP. PUTIN No More War!” 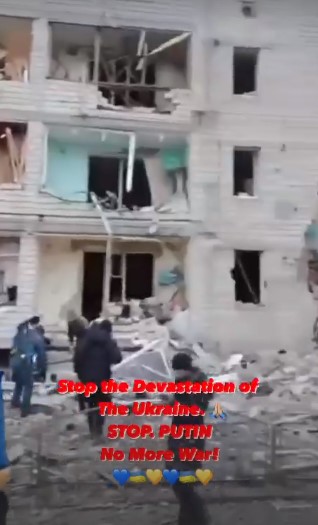 Other celebrities including Mark Ruffalo, Ashton Kutcher among several other stars have also shown their support for Ukraine on social media. Ashton Kutcher’s wife, Mila Kunis, was born in Ukraine and lived there right until the fall of the Soviet Union. “If you know someone from Russia Call them and tell them their media is lying to them,” he wrote on Twitter. “Ukraine doesn’t want to fight, they just don’t want Putin’s government and don’t want to be occupied.”

Kutcher also shared the message in Ukrainian. Earlier too, the ‘That 70s Show’ actor shared his support for Ukraine by tweeting, “I stand with Ukraine.” In addition, Kutcher retweeted the news that Airbnb was working to host refugees from Ukraine for free.

“Airbnb and Airbnb.org are working with our Hosts to house up to 100,000 refugees fleeing from Ukraine, for free,” CEO of Airbnb Brian Chesky tweeted adding, “We need help to meet this goal. The greatest need we have is for more people who can offer their homes in nearby countries, including Poland, Germany, Hungary and Romania.”

For the unversed, last week, Russian President Vladimir Putin announced a military operation in Ukraine and warned other countries that any attempt to interfere with the Russian action would lead to “consequences they have never seen.”