Royal jewellery: Greville Festoon necklace worn by Camilla is worth a huge £8m 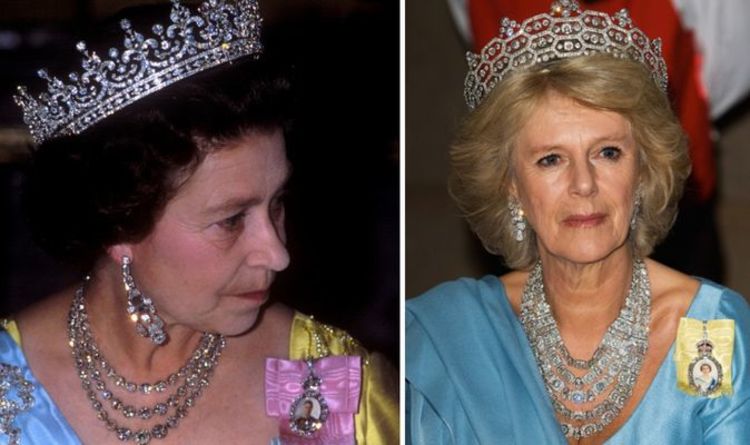 To royal evening events, Camilla often wears opulent pieces featuring gemstones or diamonds. More than once, she has donned a historical necklace known for being one of the Queen’s most expensive jewellery pieces.

The Royal Family’s most expensive jewellery pieces have been revealed by online jewellers jewellerybox.

At number one, worth a whopping £66.3million is the Nizam of Hyderabad necklace, worn in the past by the Duchess of Cambridge.

The Swan Lake necklace, previously worn by Princess Diana, is the second most expensive necklace, costing £8.7million, while the third most valuable is the Greville Festoon necklace, worth £8.2million.

The latter jewel is particularly impressive because it features five diamond strings, which were added to it to make it all the more eye-catching.

One occasion was when Queen Juliana of the Netherlands visited the UK in 1950.

The Queen Mother sometimes wore the necklace with only three rows of diamonds, instead of five.

An example of this was during the German state visit to Britain in 1998.

After the Queen Mother’s death in 2002, the necklace was handed down to Queen Elizabeth.

She added: “On formal occasions, she regularly dons opulent necklaces encrusted with gemstones.

“These larger jewels range from gifts from Prince Charles to pieces in the Royal Collection whose custodian is Her Majesty the Queen, and gifts from Saudi Arabia and Middle Eastern leaders including the Emir of Bahrain and the ruler of Kuwait.

“The pandemic has heralded an emphasis on daywear and some of Camilla’s notable everyday pieces carry special significance, offering us a small glimpse into what she holds dear.”

The personalised gold bracelet is a chunky gold chain with a variety of coin-like charms dangling from it.

One of the charms is a gold disk engraved with the numbers 30.12.09, which is the birth date of her twin grandsons, Gus and Louis.