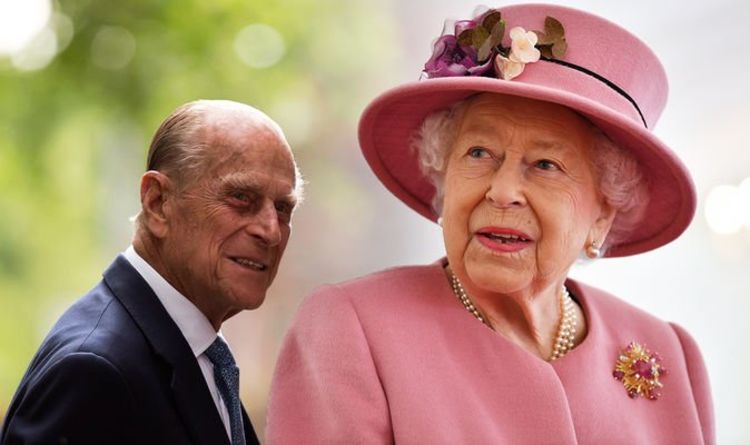 Queen Elizabeth, like many wives, received a number of jewellery items from her late husband Prince Philip. The monarch has worn these pieces on a number of occasions, with brooches often displayed on her outfits. Not only are they worth a lot of money, but they also hold great sentimental value and historical significance.

The Queen even wore this brooch for her and Prince Philip’s official platinum anniversary portrait in 2017.

Philip also designed the engagement ring he gave to Elizabeth.

Previously speaking on ITV news, journalist Eve Pollard said: “[The Duke of Edinburgh] was slightly romantic too. He designed the Queen’s engagement ring.

“He took it from diamonds from his mother’s tiara.

“His mother’s tiara had been put in a bank in Paris. He and his three sisters, who were then alive, had to sign and get it out.”

The expert explained the Queen’s engagement ring was made from a tiara that belonged to the Prince’s mother, Princess Andrew of Greece.

The beautiful jewel is a platinum ring set with eleven diamonds, a three-carat round solitaire and five small surrounding stones.

This was not the only piece of jewellery Prince Philip designed for his wife, however.

The Duke of Edinburgh gifted the Queen a diamond bracelet ahead of their wedding.

“He also designed a bracelet which she wears quite often over long white gloves for evening events,” Eve continued.

The diamond bracelet, often called the Edinburgh Wedding Bracelet, has been worn by the royal at various formal events.

The jewellery consists of three large brilliant-cut diamonds with a geometric design.

It is made of three square links which are connected by vertical sections and is also set in platinum.

While the bracelet has been in the Queen’s possession for many years, she will only wear it on certain occasions.

These have mostly included formal events, where she will wear it over white gloves, or in portraits.