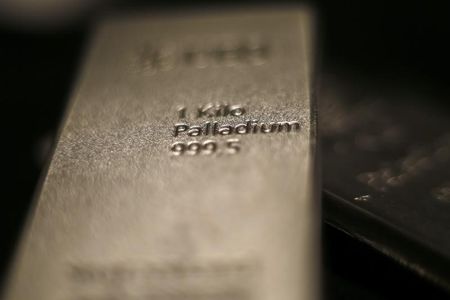 March 18 (Reuters) – Gold prices dropped on Thursday as a surge in U.S. bond yields and a firmer dollar hammered bullion’s appeal, while palladium jumped as much as 7% on strong demand prospects amid supply disruption worries.

Federal Reserve Chairman Jerome Powell on Wednesday repeated a pledge to hold interest rates near zero in an effort to keep the economic recovery on track even if inflation breached its 2% target this year. Powell comments on interest rates were very supportive for gold, but on the other side of the coin the fact that 10-year yields continue to rise has limited any upside in gold,” said Bob Haberkorn, senior market strategist at RJO Futures.

Some investors view gold as a hedge against higher inflation that could follow stimulus measures, but higher Treasury yields dull some of the appeal of the non-yielding commodity.

“On one hand, the regime doesn’t bode well for investment flows into gold, and that creates pressure to the downside. On the other hand, we do see some buyers on the dip,” TD Securities commodity strategist Daniel Ghali said.

Russia’s Nornickel Nickel , the top producer of palladium, cut its 2021 output forecast on Tuesday because of waterlogging at two Siberian mines. disruption in supply, especially out of a major producer, is absolutely playing into this market, along with expectations of more demand from the automobile sector,” RJO Futures’ Haberkorn said.