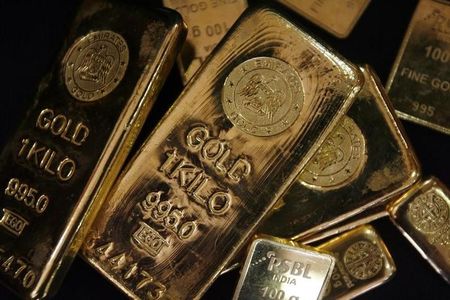 April 22 (Reuters) – Gold prices steadied near a two-month high on Thursday, a whisker away from the key $1,800 threshold as the U.S. dollar faltered with easing Treasury yields, while supply concerns kept palladium anchored near last session’s record peak.

“What’s obviously underpinning the upswing (in gold) is the dynamic in U.S. Treasuries … which is sort of pushing lower in the very short term,” said IG Market analyst Kyle Rodda, adding that a drop below 1.5% in yields could help push gold above $1,800, a key psychological level.

The benchmark 10-year U.S. Treasury yield was pinned below 1.6%, reducing the opportunity cost of holding non-yielding bullion. The held near multi-week lows against most major currencies. USD/ US/

Gold prices could easily move above $1,800 in the next couple of days because there is still a lot of uncertainty in the global markets, said Harshal Barot, a senior research consultant for South Asia at Metals Focus.

“COVID-19 cases continue to be at record highs in a lot of countries and there is this whole revaluation about global growth prospects that should help safe haven assets (like gold).”

“Long running tightness in the market is fuelling the metal’s rise as auto demand remains strong,” HSBC analysts wrote in a note, adding that they expect prices to be volatile.

The auto-catalyst metal has surged nearly 25% since Russia’s Nornickel , the world’s largest producer of the metal, partly suspended operations at two of its mines in late February.