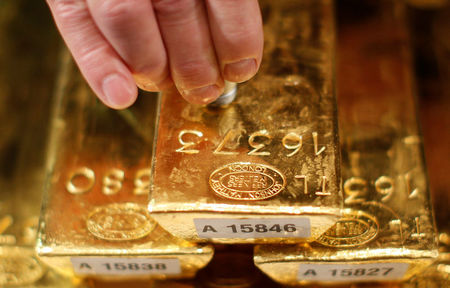 * Gold gains over 2% so far this week

* rises over 3%, palladium gains about 5% for the week (New throughout, adds comments, updates prices)

April 16 (Reuters) – Gold prices rose to a seven-week high on Friday and were on track for their best week since mid-December as retreating U.S. Treasury yields and a softer dollar bolstered the metal’s appeal.

“The macro argument for gold has also improved. We are poised for a run towards $1,800,” said Edward Moya, senior market analyst at OANDA.

“We’ve had many investors abandon some positions because of some extreme technical selling we saw with Treasury yields and that has really provided a strong backdrop here for gold prices to continue to appreciate.”

Benchmark U.S. bond yields hovered near a one-month low hit in the previous session, while the dollar edged lower against its rivals. US/ USD/

Gold’s advance came despite robust U.S. retail sales data showing and a significant drop in weekly jobless claims. markets are trusting the Federal Reserve to keep interest rates lower for longer, so even if inflation does jump above 2% for a few weeks or months, central bank tapering is still a bit farther, ActivTrades Chief Analyst Carlo Alberto De Casa said. monetary policy tends to weigh on government bond yields, and raise the appeal of non-yielding gold.

The drop in 10-year yields below the key 1.60% mark “has allowed spot gold to break above its 50-day simple moving average (SMA) for the first time since early February,” FXTM Market Analyst Han Tan said in a note.