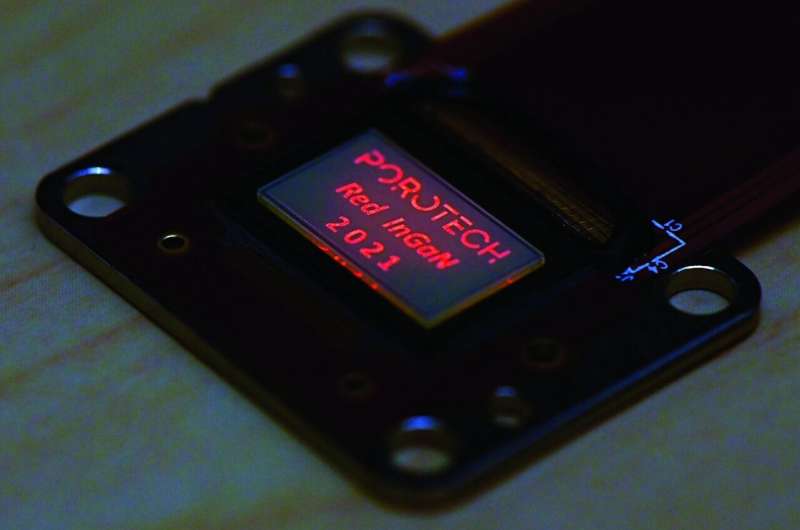 Officials at Porotech, a gallium nitride material technology development spinoff begun by a team at the University of Cambridge, announced on its news page the development of a micro-display based on native red indium gallium nitride—a move that they claim will improve the experience for users wearing augmented reality (AR) glasses. As part of their announcement, they note that the new technology means that users will be able to buy AR equipment that has all three of its LEDs produced by a single toolchain.

AR glasses are meant to be used with other devices, such as a smartphone. Information stored in databases regarding the real world surrounding the user (such as the titles of movies showing at a theater) is retrieved and then sent to the glasses which display the information over a target (such as the actual theater) on the glass in front of one eye. Typically, such information is fed as a stream to a user giving them new information as they move through their surroundings. Micro-LED displays are but one option for users looking for a good AR experience but they have suffered from problems related to competing with natural sunlight—the LEDs must be very bright and vibrant. And, as the team at Porotech note, up until now, AR glasses makers have had to improvise when it came time to implement red emissions—blue and green were native but red had to be done using aluminum indium gallium phosphide, which, they note, does not perform well when used in small pixel applications such as that required by AR glasses—efficiency suffers, in the form of time lags for the user.

The team at Porotech also claim that their new porous semiconductor material will alter the landscape, making new kinds of AR glasses possible. They suggest that devices made with their new technology will be lighter, more comfortable and less intrusive. They further suggest that these devices will also be more efficient since they will not have to involve filtering—an improvement that should lead to a more seamless AR experience. They conclude by suggesting that their new technology will also bring down costs, which in turn should lead to increased commercialization of such devices.

Making the shift from blue to red for better LEDs