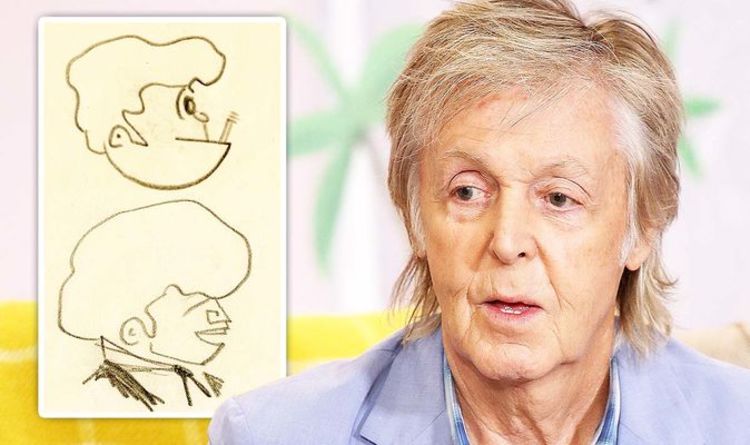 The Liverpudlian legend changed the world as part of The Beatles, who performed together for an unforgettable 10 years before splitting up. Sir Paul is one of two surviving members of the band alongside Sir Ringo Starr, 80, after the deaths of John Lennon and George Harrison. The 78-year-old continues to make music to this day and released his latest album McCartney III Imagined last week.

Since the dissolution of The Beatles, Sir Paul has also become known for his artistic talent.

He produced a number of paintings, including abstract portraits of Queen Elizabeth II, David Bowie and Elvis Presley.

Recently, Gotta Have Rock And Roll Auctions has listed a new piece by Sir Paul that many will have never seen before.

The sketch comes from when he was a 16-year-old student at the Liverpool Institute High School for Boys.

Beatles: Paul McCartney’s sketch from when he was 16 years old has raised questions at a new auction (Image: GETTY / GOTTA HAVE ROCK AND ROLL AUCTIONS)

The Beatles: Paul McCartney was 15 when he met John Lennon, then 16 (Image: GETTY)

Auction house owner Ed Kosinski told Express.co.uk: “The drawing is rare and unique because it was from so early on during his time at art school.

“Anything from that period is almost impossible to find.

“It shows that he was an artist first and foremost and later he became a very prominent painter.

JUST IN: Beatles’ ‘more popular than Jesus’ remark was ‘pro-religion’

The Beatles performed together for 10 years before breaking up in 1970 (Image: GETTY)

“Art was his first form of being an entertainer, this was before his fame with The Beatles.”

Sir Paul was 15 years old when he met John, then 16, when he was performing at a church fete garden party with the original line-up of The Quarrymen.

They both attended the Liverpool art school and five years later, became international icons after the release of From Me To You in 1963.

Sir Paul’s drawing, which was sketched in pencil, shows two faces that could represent the legendary songwriting duo.

Express.co.uk were told ‘it’s possible’ that the Paul McCartney sketch was of him and John Lennon (Image: GETTY / GOTTA HAVE ROCK AND ROLL AUCTIONS)

The first sketch on the left shows a man with hair that looked very similar to the star during the “early Beatles” years.

The unknown man, who is dressed in a blazer, shirt and tie, smiles as he looks ahead at the next figure.

The other sketch shows a man with a cigarette hanging out of his mouth who seemed to have extremely wide eyes.

That second figure, who bears a typical quiff of the era, could have been a sketch of a young John.

The Beatles: Paul McCartney may have sketched himself and John Lennon in a sketch from the fifties (Image: GETTY / GOTTA HAVE ROCK AND ROLL AUCTIONS)

The Beatles: This copy of the white album was described as ‘the holy grail’ for fans and collectors (Image: GOTTA HAVE ROCK AND ROLL AUCTIONS)

Express.co.uk asked Mr Kosinski whether he thought the sketches were early portraits of The Beatles.

He replied: “They did meet in art school so it is possible.”

However, Gotta Have Rock And Roll’s website noted “the cartoon-like” characters “strike a resemblance to the aesthetic of the early Beatles”.

The artwork, which is open for bidding until Saturday, was described as potentially being “a self-portrait” of Sir Paul.

The Beatles: Get Back documentary teased by Peter Jackson

Other items listed in the auction include “the only known existing copy” of a “factory-sealed No 0000001 copy” of The Beatles White Album.

Mr Kosinski told Express.co.uk: “There were about 10 made and they were given to various Beatles apart from this one, which went to an executive.

“One of the Beatles previously sold his for a tremendous amount of money but this one is factory-sealed and is the only one in the world.

Prince’s outfit from the Little Red Corvette and 1999 music video is also up for grabs (Image: GETTY / GOTTA HAVE ROCK AND ROLL AUCTIONS)

“It is considered the holy grail among Beatles collectors because there are no others that are close in value.”

Other items listed include Sir Elton John’s iconic Mozart costume, which he wore during performances in 1986.

Elton John’s costume when he dressed-up as Mozart is also listed for auction (Image: GETTY / GOTTA HAVE ROCK AND ROLL AUCTIONS)

The lot included the legendary singer’s synonymous metallic purple jacket and trousers along with a ruffled white shirt.

The outfit was worn by the musician for his Little Red Corvette and 1999 music videos – and was previously owned by Lee Ryan from Blue.

To find out more about the auction lots visit: www.gottahaverockandroll.com.