Oil’s Higher, but is Hemmed in by U.S. Crude Struggles to Exceed $70 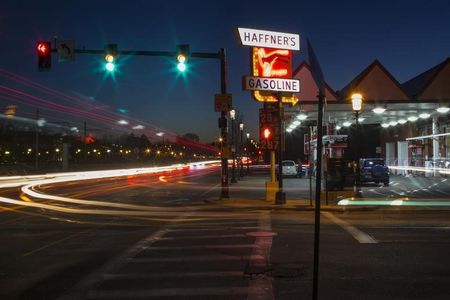 Investing.com – The U.S. oil rally seems to be hitting a bit of a wall beyond $70 per barrel.

, the benchmark for U.S. crude, reached another 2018 high on Thursday, rebounding from the previous session’s decline pressured by concerns over a weak summer start for gasoline demand.

But despite an OPEC monthly prediction that global oil demand will accelerate in the second half of the year and burn through the pandemic-triggered supply glut accrued through last year, WTI’s daily gain and price peak were barely headline-worthy.

This suggested that crude bulls needed to find a new catalyst to keep the market’s current upward momentum alive, without descending into a near-term correction at least.

WTI’s advance slowed after the U.S. Energy Information Administration said reported on Wednesday that rose by 7.05 million barrels during the week ended June 4. Analysts tracked by Investing.com had forecast a build of just 1.2 million barrels.

fell sharply too, by 5.2 million barrels versus forecasts for a 3.5 million-barrel decline. But that was only because of the ramp up in fuel production due to a spike in refining activity.

Analysts have projected one of the biggest ever summer demand periods for fuel in the U.S. as the economy reopens fully from a year of lockdowns and safety measures imposed after the March 2020 outbreak of the coronavirus pandemic.

But U.S. fuel take-up has so far been tepid, suggesting that more time was probably needed for demand to accelerate.