The US session saw a jolt of volatility move throughout markets as the Federal Reserve’s March policy update kept rates steady, as expected. The Fed’s other major policy tool, quantitative easing, was also held firm at $120 billion per month in bond purchases, composed of $40 billion in mortgage-backed securities and $80 billion in Treasuries.

While major policy tools were largely unchanged, Federal Reserve Chair Jerome Powell’s language, along with the updated Summary of Economic Projections (SEP), sent the US Dollar lower against its major peers. Seven Fed officials now see a rate increase by 2023, with inflation rising to 2.1%. The Dow Jones, Nasdaq and S&P 500 all moved higher following the announcement. 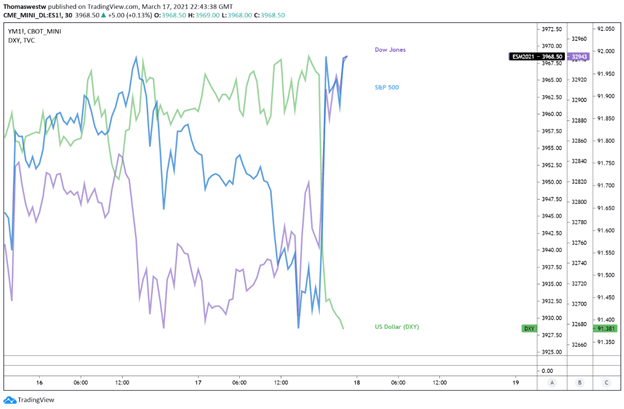 Australia’s February jobs report will be Thursday’s main event, with the country slated to report 30k jobs added and a 6.3% unemployment rate, according to the DailyFX Economic Calendar. The high-impact event will likely inject some movement across AUD pairs. Analysts will also be keeping a close eye on the mix of full-time and part-time jobs within the report to help gauge the strength of Australia’s economic recovery.

Earlier today, New Zealand’s gross domestic product (GDP) for Q4 crossed the wires at -1.0% over a quarterly basis versus expectations of 0.1%, according to the DailyFX Economic Calendar. Annually, the island-nation’s growth rate fell to -0.9% from 0.2% in Q3, missing expectations of 0.5%. The prior quarter saw a revision lower, from 0.5%.

While New Zealand has seen great success in battling the Covid-19 pandemic within its own borders, its tourism and hospitality industries have suffered as a result. December is normally one of the strongest months for the Pacific nation’s tourism revenue due to warm weather, but travel restrictions have essentially halted all foreign travel.

The New Zealand Dollar is moving higher against the US Dollar after the Federal Reserve decision sent the Greenback lower. NZD/USD has managed to drift higher since earlier this month when prices pierced below an ascending trendline. Now, that trendline is back in focus as an area of resistance before the Kiwi can move higher.

The MACD oscillator appears to be nearing a bullish cross above its signal and center lines. The Relative Strength Index (RSI) is also oriented to the upside. The upside path will also face the 38.2% Fibonacci retracement level as a possible point of resistance. Alternatively, the 61.8% Fibonacci could step back in to underpin prices. More immediate support from the 50-day Simple Moving Average is possible just above the 0.72 handle. 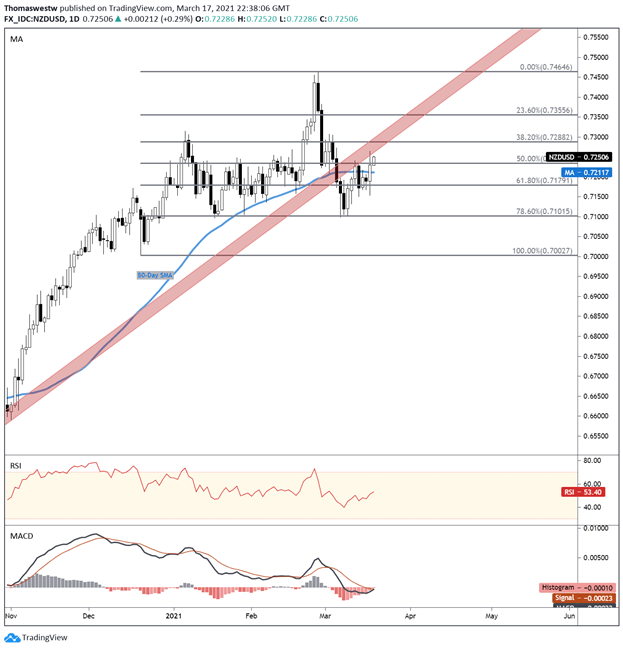