Asia Pacific markets may turn lower Tuesday despite a fairly upbeat start to the week. The main event risk on today’s menu is the Reserve Bank of Australia (RBA) rate decision. Given multiple lockdowns across Australia, particularly in New South Wales (NSW), the central bank is largely expected to hold policy steady and perhaps increase support via reversing its earlier decision on reducing weekly bond purchases. A potential turnaround in RBA bond-buying might shore up confidence in the lockdown-stressed economy, potentially benefiting equities while weighing on the Aussie Dollar.

The New Zealand Dollar is also in focus, with Wednesday’s second-quarter jobs report looming. Analysts expect the unemployment rate to cross the wires at 4.5%, down from 4.7% in the first quarter. The quarter-over-quarter employment change is expected to drop at 0.7%, up from 0.6% in Q1. The rosy outlook may help fuel some hawkish RBNZ bets, especially if this week’s data beats analysts’ expectations.

Despite the upbeat overnight performance, the regional risk-sensitive currencies are still down on the week. Both the Australian and New Zealand Dollar’s fell to start the week after China’s NBS manufacturing PMI showed a slowdown in growth. This also weighed on economically–sensitive oil prices. Crude and Brent oil benchmarks are remaining lower heading into the Tuesday trading session. A services PMI survey out of China will cross the wires later this week.

The slowdown in Chinese growth is hardly isolated. PMI surveys across Southeast Asia have echoed the drop in economic activity seen in the world’s second-largest economy, with Thailand and Indonesia seeing contractions, according to IHS Markit data. Elsewhere, Australia’s Queensland joined NSW in a lockdown after the state recorded 13 locally sourced Covid cases, the most in over 12 months. Meanwhile, NSW reported over 200 new infections on Monday.

The New Zealand Dollar has fallen back against the upper bound of a Descending Wedge pattern versus the US Dollar. The failed breakout was capped by the falling 26-day Exponential Moving Average (EMA), which will likely come back into play as resistance to the upside. Prices appear to have found a level of support from the 38.2% Fibonacci retracement, but more weakness will bring NZD/USD back into the wedge formation. 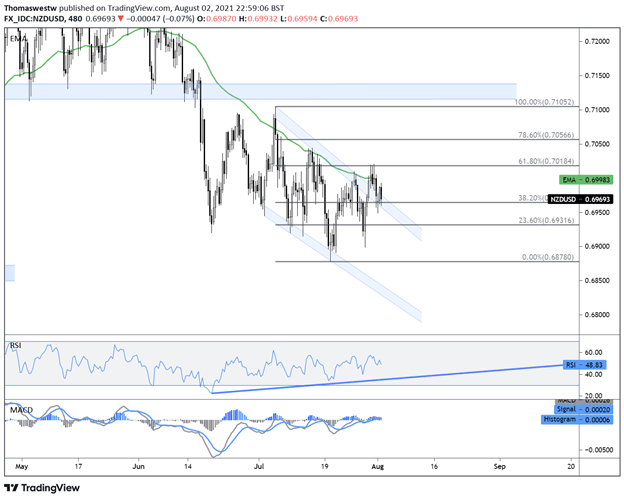