The New Zealand Dollar led the way lower for risk currencies after a community Covid case in New Zealand’s largest city, Auckland, was reported and the country prepared to go into a lockdown. The RBNZ rate decision tomorrow now takes on heightened significance as the previous hawkish stance has been wound back by interest rate markets and it may have consequences for other central banks that had taken on hawkish rhetoric of late. While other risks were emerging, the high-octane risk indicators of NZD/JPY and AUD/JPY saw large declines and the risk-off sentiment was spreading though most equity indices in the region.

The RBA meeting minutes were also released today and as they are 2 weeks old, appear to be outdated given the steepening Delta curve in Australia. The RBA did provide the usual caveats around changing conditions and the market expects them to reconsider the previously announced winding back of asset purchasers at the next meeting in September.

Tonight will see the release of US retail sales and industrial production data, while Fed Chair Powell is due to speak later in the day.

The New Zealand Dollar saw large declines against the Japanese Yen today as it crashed through the 200-day moving average and could potentially look to test the previous low at 75.25 if the current risk aversion environment were to persist for financial markets. The downtrend appears to be intact after today’s move, as the late May high of 80.20 has not been threatened by any of the rallies since. 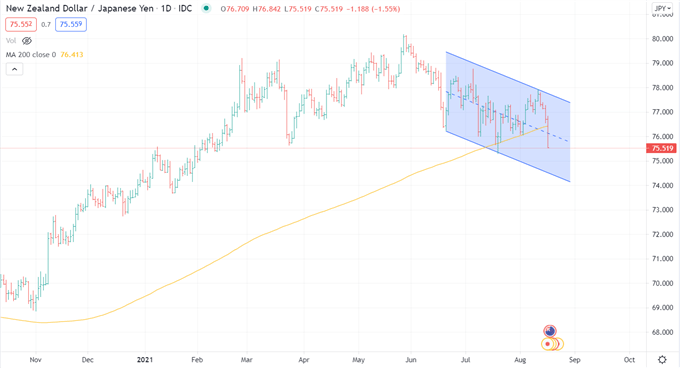