Bollywood actress Neha Dhupia and her baby boy were discharged from the hospital on Thursday (October 7) evening. The actress was seen covering her newborn son’s face from the paparazzi as they tried to click them while she and Angad were leaving the hospital. In the pictures that surfaced online, we can see Neha holding her son close to her while Angad carried their daughter Mehr. The baby boy was wrapped in a green clothes and Neha covered his face from the cameras. 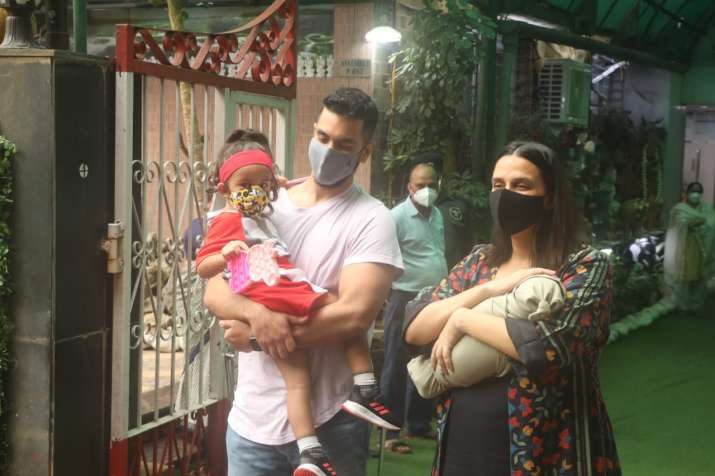 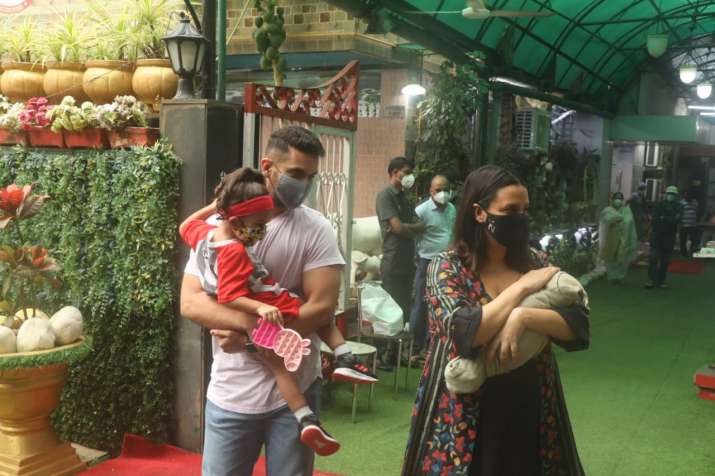 Neha and her actor-husband Angad Bedi welcomed their second child, a son, on October 3. The couple is already parents to a daughter named Mehr. Angad took to his Instagram and shared the good news. He shared a picture from his and Neha’s pregnancy shoot and wrote, “BEDIS BOY’ is here!!!!!! The almighty today blessed us with a baby boy. Both neha and the baby are well. Mehr is ready to pass on the ‘baby’ title to the new arrival. Waheguru mehr kare @nehadhupia thank you for being such a warrior through this journey. Lets make it a memorable one for all 4 of us now.”

Several celebraties also sent their good wishes to the couple. Neha’s close friend and actress Soha Ali Khan took to Instagram and penned a heartfelt for her. Sharing a series of pictures of Neha she wrote, “Congratulations @nehadhupia @angadbedi – and well done for timing it perfectly between birthdays!!  lots of love and blessings always !!”

Angad Bedi and Neha Dhupia announced the news of Neha’s second pregnancy on July 19 with a cute picture. It was captioned, “Took us 2 days to come with a caption….The best one we could think of was … Thank you, God.”

For the unversed, the couple got married in May 2018. They welcomed their daughter Mehr just a few months later.