The panel’s findings formed the basis of the Tamil Nadu government’s move to scrap NEET for admission to MBBS programmes in the state.

The nine-member panel, tasked by the state government to assess the impact of NEET on medical admissions, found that the proportion of rural students fell from an average of 61.45% (pre-NEET) to 50.81% (post-NEET).

Candidates from government schools, who were under-represented even before NEET’s introduction, fell further behind. On average, government school students made up 1.12% of the first-year MBBS batch in Tamil Nadu pre-NEET. The figure dropped to 0.16% post-NEET (unreserved seats). Last year, the state government introduced a 7.5% horizontal reservation for state-run school students.

Before NEET, 98.23% of students getting into medical colleges were from state board schools, and less than 1% were from CBSE affiliated schools. 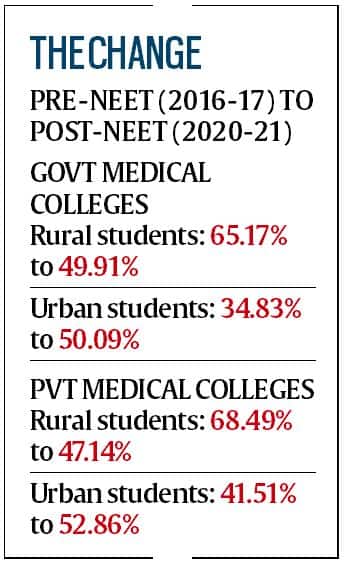 Following a Supreme Court ruling, NEET is the only single-window examination for entry into any medical school in the country. It came into effect from the academic year 2017-18.

Before NEET, admission to medical colleges in Tamil Nadu was mainly based on board marks. Since 2017, the state has tried to exempt itself from the exam — through an ordinance, litigation and protests. Just in the last week, there have been two suicides in the state reportedly related to the entrance test.

On Monday, Chief Minister M K Stalin introduced a Bill in the Assembly seeking exemption for Tamil Nadu students from the centralised medical entrance exam. The Bill was passed and now requires the President’s assent to be implemented.

Abolishing NEET is one of the electoral promises of the DMK. In June this year, the DMK government set up a nine-member committee to “study whether the common medical entrance test has affected the socially backward students in the past few years.” The committee, headed by former judge A K Rajan, submitted its report a month later.

According to Professor Jawahar Nesan, a member of the committee, rural students are now particularly disadvantaged since they cannot afford coaching classes to clear the entrance test.

“In 2020-21, 99% of the candidates who got a medical seat in Tamil Nadu received some form of coaching. Of these, close to three quarters qualified the exam after two or more attempts. This means a majority of those clearing NEET in our state have spent lakhs on coaching. How can you expect students from villages and low-income families to compete with them,” he told The Indian Express.

Discounting the argument that NEET ensures quality checks, he said: “We have analysed the performance of students in the MBBS programme before and after NEET. Those who came in based on their board marks perform marginally better than those who came in through NEET. When there’s hardly any difference in classroom performance then the quality argument in favour of NEET doesn’t hold.”