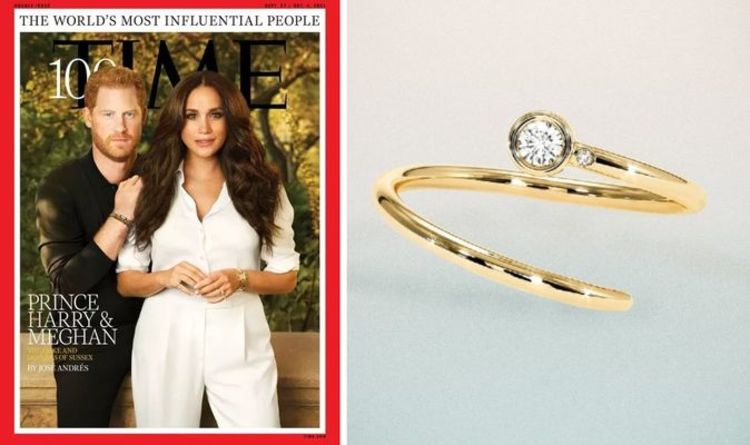 Prince Harry, 37, and Meghan Markle, 40, were praised by TIME magazine for having “compassion for the people they don’t know”. The pair were seen on the magazine’s front cover, wearing contrasting outfits.

Harry seems to be wearing three beaded bracelets in autumnal colours, while Meghan’s choice of wristwear is gold.

While wearing the Cartier Tank Française watch, Meghan appears to be making a subtle tribute to Princess Diana.

The watch belonged to the late princess and was passed down to Harry and William when she died.

It was then given to Meghan when she married Harry in 2018.

As for Meghan’s other jewellery, the Duchess is wearing both her diamond engagement ring and her eternity ring.

The eternity ring is a gold band featuring the birthstones of Harry, Meghan, and Archie – a blue sapphire, an olive-green peridot, and a green emerald.

The Duchess also wore rings on both of her pinkie fingers.

One of these is a gold ring featuring a tiny diamond beside a larger one.

Called the Duet Pinky Ring, it is designed by American jewellery brand Shiffon and costs $525.

This is currently equivalent to around £380.

According to Shiffon, the rings diamonds represent one woman supporting another through a “pinkie promise”.

The jewel also hints towards Meghan’s commitment to sustainable fashion as Shiffon’s diamonds are “ethically sourced and follow conflict-free and socially responsible practices”.

Founder of the company, Shilpa Yarlagadda, said her aim with launching the brand was to “give women equal footing”.

On its website, Shiffon stated: “Our mission at Shiffon is to close that gender gap, particularly in entrepreneurship.

“Entrepreneurship is about taking action and learning quickly, and we want to give women the opportunity to do that while not being afraid to take risks or fail.

“We are optimistic that we can begin making this change.

“Through our efforts, we aim to financially empower a million women across the globe by 2025.”

Photos of Meghan and Harry appeared in TIME magazine alongside a profile written about the couple by José Andrés, founder of World Central Kitchen.

José said: “Springing into action is not the easy choice for a young Duke and Duchess who have been blessed through birth and talent, and burned by fame.

“It would be much safer to enjoy their good fortune and stay silent.

“That’s not what Harry and Meghan do, or who they are.

“They don’t just opine. They run toward the struggle.”