Less than half of Indian graduates are employable, BTechs have highest skills: Report

In contrast to the common belief, it is the BTech graduates who are most employable with 46.82 per cent followed closely by MBAs at 46.59 per cent, states the report. 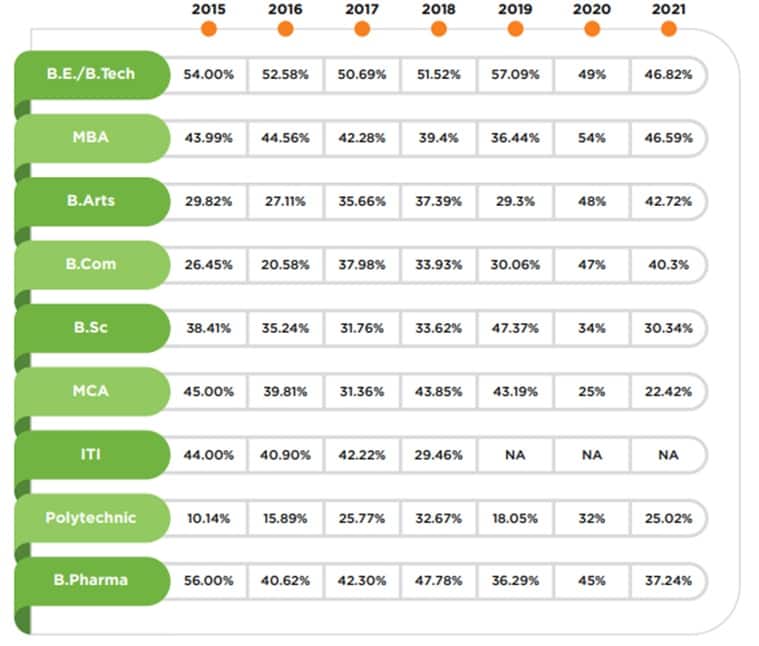 Despite women being more hireable, it is the men who secure most jobs. On an average, 64 per cent of all professionals are men, while only 36 per cent of the workforce are women in India, as per the report.

The highest percentage of women in any sector was recorded in the Banking and Financial Services Industry (BFSI) making up to 46 per cent of the employable talent in this industry. Female employees in the Internet businesses were recorded at 39 per cent. The highest number of male employees were from the automotive domain with 79 per cent, followed by the logistics sector (75 per cent) and then the core and energy sector with 72 per cent employable.

Geography-wise, candidates from Maharashtra, Tamil Nadu, Uttar Pradesh, and Karnataka were found with highest employable talent while Hyderabad, Bengaluru and Pune ranked top among the cities. Compared to last year’s data, Mumbai has come down from the top 10 cities list, with Hyderabad, followed by Pune, consisting of more employable resources to become one of the cities with the most employable talent.

The report is prepared by Wheebox, in partnership with Taggd, CII and AICTE, AIU and UNDP. It further highlights that the hiring intent has almost doubled after a steep decline in 2020. The intent was at 15 per cent in 2019, down to 10 per cent in 2020, and currently stands at 19 per cent in 2021, as per the report. This year, the hiring is expected to be the most in the BFSI, software/hardware, and IT and internet businesses.