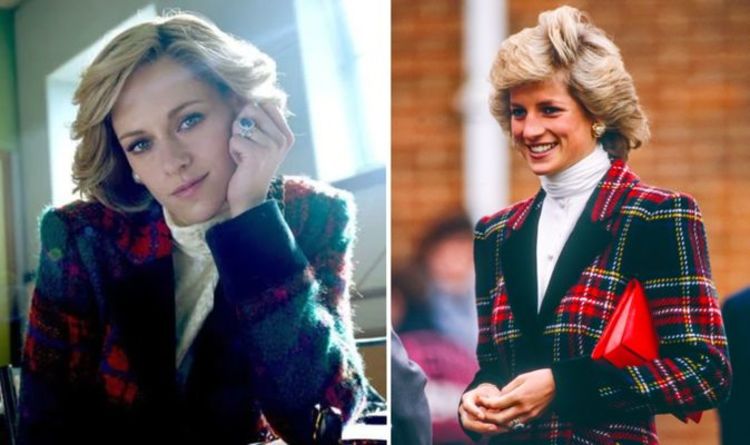 Kristen Stewart, 30, is an American actress best-known for her role as Bella Swan in the Twilight saga. An image was revealed yesterday of Kristen in her next major role: as Princess Diana in Pablo Larraín’s Spencer, which is set to be released later this year. Pablo has directed other critically acclaimed biopics, such as Jackie and Neruda.

Kristen’s tartan jacket paired with the cream blouse is a look that Princess Diana sported herself when she was still married to Prince Charles.

In 1989, Diana wore the outfit when she visited Portsmouth to visit the town’s mayor and the residents of Eastney Community Centre.

For the visit, Diana also wore pearl earrings, framed in gold, and her sapphire engagement ring.

There are small differences to Diana and Kristen’s look, such as the fact that Diana’s roll-neck blouse is white, not cream, and it has buttons on it.

Diana is also clearly wearing blue eyeliner on her lower eyelids for the Portsmouth visit.

However, Diana wore her tartan jacket, as well as other jackets in similar prints, for various different engagements, not only for this visit.

Although it is clear that Kristen is supposed to be wearing Diana’s sapphire and diamond engagement ring, which is now owned by the Duchess of Cambridge, some experts have noted that they do not think that the ring is a good replica of the original.

Posting on Twitter, The Court Jeweller said: “The engagement ring replica is… not good.

“It’s one of the most recognizable and knocked-off royal jewellery pieces out there. Surprised they flubbed it so badly,” the jewellery expert added.

Posting on her Instagram story, Elizabeth said: “@courtjeweller pointed out on Twitter how awful this replica of the ring is and now it’s the only thing I can see.”

The royal style expert added a promotional photo of Diana: A New Musical to her stories, which will premiere on Netflix this summer and stars British actress Jeanna De Waal as Diana.

In the photo, Jeanna wears a cream suit and, of course, the iconic ring.

Elizabeth commented: “Haven’t seen a close-up of the ring but from faraway it looks more like it.”