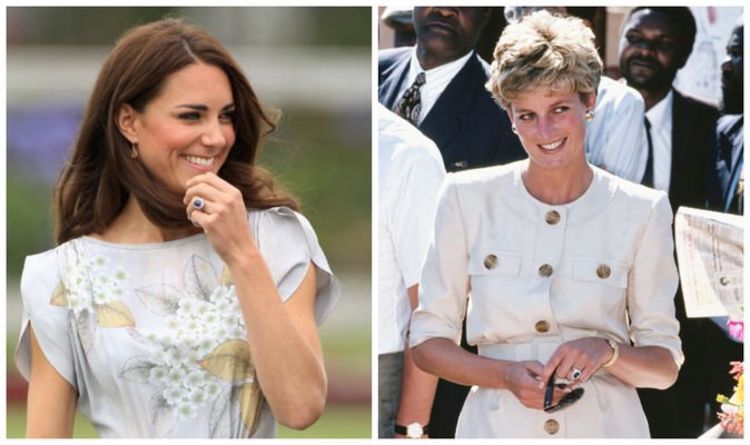 Princess Diana’s iconic sapphire engagement ring is renowned across the world and reappeared in the media when Prince William proposed with it to Kate Middleton in 2010. The Duke and Duchess of Cambridge married in 2011 in Westminster Abbey and Kate is still seen wearing Princess Diana’s former blue sapphire engagement ring. The ring features a 12-carat oval blue sapphire surrounded by 14 solitaire diamonds.

They did this by adding small platinum beads inside the band to reduce its diameter.

This meant they did not have to break and resolder the band itself.

Great care would have been taken not to affect the striking Sapphire stone and surrounding diamond halo, the two elements which made this dazzling ring so memorable.

As this ring previously belonged to Prince William’s late mother, he would have taken drastic care not to damage its original form, as would the Duchess of Cambridge.

Princess Diana originally selected this ring herself, and reportedly, it reminded her of her mother’s engagement ring, and also matched her eyes.

According to The Court Jeweller, it would have cost approximately £28,500 at the time in 1981.

Kate now wears the ring alongside her beautiful wedding ring, which is made from Welsh gold.

“Kate’s outfit was also enchantingly reminiscent of her mother-in-law Princess Diana’s own appearance in a showstopping metallic gold dress at another James Bond premiere, ‘A View to Kill’, in 1985.

“Princess Diana was never able to become Queen but this tribute of Kate’s – as well as the fact that Kate wears Diana’s engagement ring as her own – is a way of ensuring that Diana has an unbreakable connection to the throne.

“Indeed, Kate’s gold metallic dress, embellished with thousands of sparkling sequins and draping the gown’s architectural shoulders with a cloak reminiscent of a Greek goddess, may well have been the first time many of us registered that we were looking at the future Queen Consort of England, which she will become after Prince William ascends the throne.

“Kate – who accessorised her gold outfit with sparkling, circular Onitaa earrings and had her mane swept into an intricate, glossy updo – made a clear and powerful statement to the world that night, that she is more than capable of the greater responsibility that will be placed upon her as the Queen begins to rest more from royal duties.”