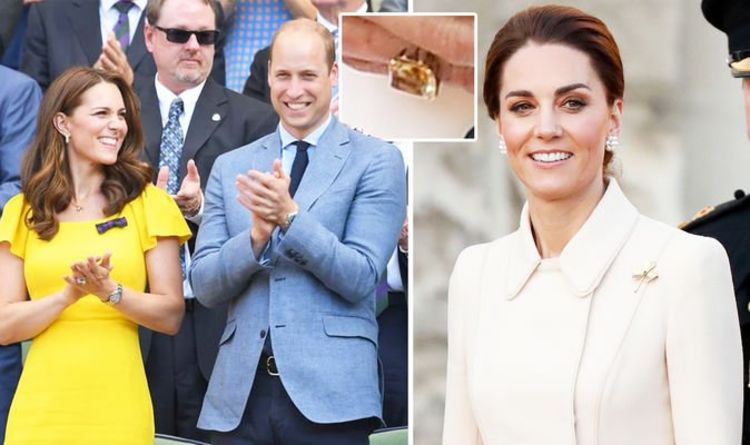 Kate Middleton, 39, has worn many lavish pieces of jewellery including tiaras, necklaces and rings. She will often wear rings from her private collection as well as ones she has been gifted by Prince William, 38.

As working royals, Kate and Prince William have switched to virtual engagements due to the coronavirus crisis.

Whether stepping out or appearing virtually, the Duchess will attract attention with what she is wearing.

The royal has an enviable wardrobe to match her extensive jewellery collection.

Aside from royal jewels, Kate has also worn some pieces that could have more sentimental meanings.

Kate has worn an eye-catching citrine ring several times while in the Royal Family.

The piece of jewellery has a large citrine jewel and is yellow in colour.

She first wore the jewel before her wedding and it could be worth a small fortune, Ben Johnson, Managing Director at Miltons Diamonds, explained.

“It is widely claimed that the citrine crystal emanates optimism and can be used to direct personal will and decisiveness.”

The Duchess of Cambridge could have conveyed this message by wearing the piece on solo engagements, Ben added.

He said: “This would explain the motivation behind Kate’s decision to wear it on occasions when she is not accompanied by the Duke of Cambridge, attending events on her own terms.

“She is an experienced royal now, capable and independent.”