Kate Middleton hair: 5 of her best looks – how to achieve them 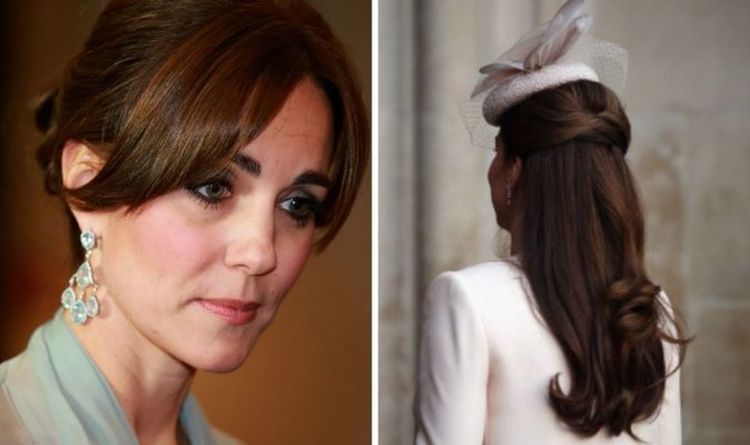 You know about ‘The Rachel’ haircut that everyone wanted in the 1990s to copy Jennifer Aniston’s locks from the show Friends, and Kate Middleton the Duchess of Cambridge is another example of famous hair that everyone wants to emulate. Her luscious locks are admired worldwide, but she doesn’t just stick to what she knows. The Duchess often freshens up her look with a fringe, highlights, subtle colour change, or she just rocks a new hairstyle, and almost always everyone scrambles to find out how she achieved the look in a bid to mimic it on themselves.

One Google search for ‘Kate Middleton’s hair’ and you’ll be flooded with information about how the brunette Duchess achieves such flawless hair all the time.

However, Kate is experimental with her hair. She doesn’t stick to one style, tone or cut, so telling your hairdresser you want ‘Kate Middleton’s hair’ can be quite a challenge unless you present them with a precise photograph.

When you think of Kate’s hair over the years, there are probably five specific moments you’re thinking about – her full fringe, her wedding hair, the hair-do she had after giving birth to Prince George, those caramel highlights, and the curtain bangs.

Express.co.uk breaks down these trendy hairstyles with help from Longevita.

Kate’s full fringe debut in September 2015 is the most influential hairstyle, with searches for the Duchess’ hair rising 426 percent above average during this time.

A full fringe suits some people but not others, and the Duchess is one of those lucky people who seem to suit any hair-do!

Kate’s fringe wasn’t choppy and defined, it was mid-length and sweeping.

This meant her fringe would split in the centre and fall to the sides of the face.

The fringe has been crafted by her hairstylist to suit her facial features, so make sure you ask your hairdresser to cut you a fringe tailored to your face.

Exactly copying Kate’s look might do you a disservice as this overgrown fringe won’t suit everyone.

Your wedding day is supposed to be the most important day of your life, especially if you’re marrying into the Royal Family like Kate was in April 2011.

For the big day, the Duchess broke a 350-year-old tradition by wearing her hair down for the occasion and searches for the hairstyle rose 336 percent above average.

Most of Kate’s hair was covered with a long netted veil topped with a Cartier tiara, but you can still see silky, soft waves peeking out.

Hairstylist James Pryce of the Richard Ward salon, who is responsible for Kate’s wedding hair, dubbed the look the ‘demi chignon’ (it was half up in a bun and half down).

He said: “Catherine’s bridal look is called the ‘demi chignon’ — an updo style which combines a classic bridal look with a regal, couture finish.

“The focus of the style was Catherine’s unique and individual halo style tiara, set just back from the hairline, which determined the finished look.”

The hairstylists haven’t given away the exact steps to achieving this look, but if you can manage to part your hair across your head above the ears and tie the top in a sleek bun, you’re nearly there.

Then, using a wide-barrelled curling iron, create some soft waves.

Kate’s stylist took the bun out after the wedding and blow-dried her hair – the Duchess then wore her hair fully down with her tiara in the evening.

Nobody looks or feels their best after giving birth, but Kate looked utterly glamorous when she emerged from St Mary’s Hospital in London in July 2013 holding Prince George.

Her hair, in particular, was the talk of the town as it looked as if it had been professionally styled, or at least blow-dried.

All you need to know about this look are the words ‘big’, ‘bouncy’ and ‘blowdry’, so ask your hairdresser for that.

If you are doing this look at home, you’ll need a hairdryer and a wide round brush.

Or, you could purchase a blow-dry tool such as the Dyson Air Wrap or a cheaper alternative such as the Babyliss Air Style 1000 to make it easier.

Kate has always been a brunette, even if she goes from an ashier shade to a chestnut colour every now and then.

However, in summer 2013, Kate debuted blonde highlights, causing the fourth-highest spike in interest for her hair.

There was a hint of subtle highlights outside the Lindo Wing following the birth of Prince George, but it wasn’t until months later that Kate appeared much blonder.

Any brunette can have blonde highlights, but make sure it’s a flattering shade of blonde in contrast to the tone of brunette you have – ask your hairdresser what will suit you.

Curtain bands are extremely on-trend right now, but Kate did them first just under a decade ago!

The Duchess showed off her curtain bangs for the very first time in around November 2012 – causing a search interest spike in her hair of 231 percent.

Ask your hairstylist for curtain bangs, a curtain fringe, or simply just a face-framing cut to achieve this look.

They’re super low-maintenance and look good on pretty much everyone, as long as they’re cut in softly rather than bluntly.