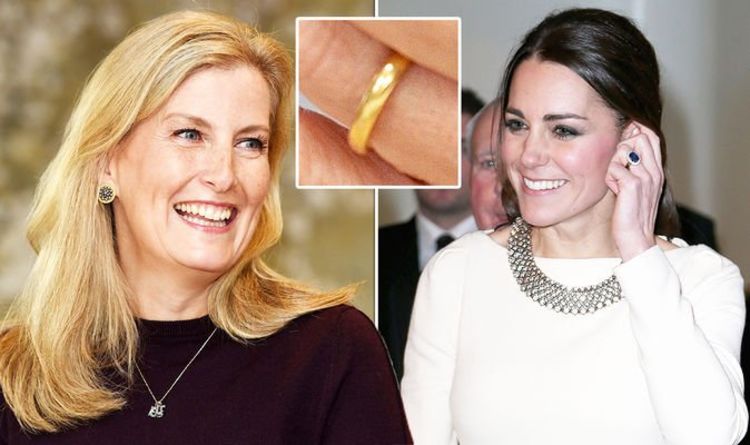 That is a Welsh gold wedding band which is given to royals on their wedding day, head of design at 77 Diamonds Charlotte White explained.

Speaking to Express.co.uk, the expert stated all the rings are made from a rare gold found in North Wales and bind the royal women together.

“Welsh gold enjoys a historic link with the British Royal Family – and even binds some members together in a very unique way,” Charlotte stated.

“Today it is among the rarest gold in the world largely because the mine it comes from – the Clogau St David mine in North Wales – is no longer in operation.”

The tradition has been followed by royal women for many years and even Queen Elizabeth II herself has sported a similar ring since her 1947 wedding to married Prince Philip.

Queen Elizabeth, the Queen Mother, was the first to be given the rare gold ring and it has since been used to create jewels for royals including Princess Anne, Sophie, Countess of Wessex and Kate Middleton.

Charlotte continued: “Members of the British Royal Family have used Welsh gold to create their wedding bands since the tradition was initiated by the Queen Mother when she married the Duke of York in 1923.

“Senior royals have been following her tradition ever since.

“The Queen’s wedding ring in 1947, that of Princess Margaret in 1960, the Princess Royal in 1973 and Diana, Princess of Wales in 1981 were all produced from the very same nugget of gold.”

While the simple gold bands have been worn by royals for nearly 100 years, the ring worn by younger royals is slightly different.

This is because there was no more of the original block of gold left by the time the Queen’s youngest children got married.

Although the same block of gold was not used from in the 1980s, the tradition was able to continue as the Queen was given another nugget of the rare metal.

It is from that block rings have been made for Kate Middleton, Camilla, Duchess of Cornwall, and Sophie, Countess of Wessex.

“Part of this gold was used to create the ring for Sophie, Countess of Wessex and Camilla, Duchess of Cornwall.

“When William and Kate married, the Queen gave William a nugget of Welsh gold to mark his wedding and this was used to fashion Kate’s wedding ring in 2011.”