Japanese Yen Wallows Near Historical Lows Against the US Dollar and the Swiss Franc.

USD/JPY is within an ascending trend channel that started in early March.

The last few sessions have seen the price action move mostly sideways, but it remains above all daily SMAs across all time periods. This could indicate bullish momentum may continue to evolve.

A move below the 5-day SMA could see momentum pause, but it would a move below several SMAs to confirm a turn in momentum.

CHF/JPY has historically exhibited periods of range trading, which is not surprising given the similar underlying fundamental characteristics. A break-out of the range has previously seen a run to new levels before a new range is established.

It’s possible that the recent run higher has paused, and it might be establishing a new range of 131.95 – 136.18, the low and high of the last month. These levels may provide support and resistance respectively.

The short-term 10-day SMA has just crossed below the 21-day SMA, which may signal that near term bearish momentum could unfold.

The 34- and 55-day SMAs are below the price and have positive gradients, suggesting that underlying bullish momentum remains. This clash of momentum signals might be indicative of a range trading environment for now. 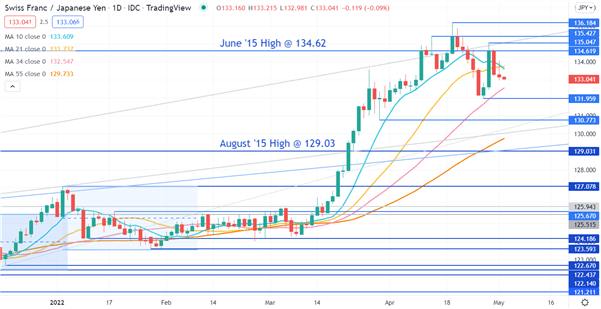