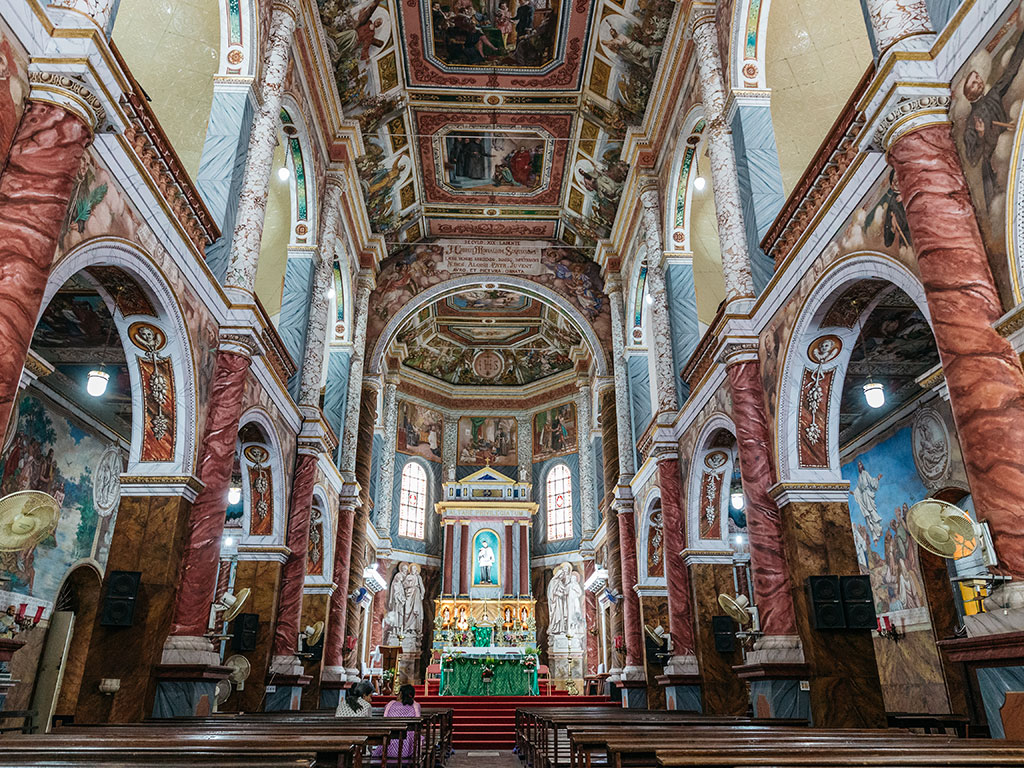 Built in 1885, the walls and ceiling of St Aloysius Chapel tell fascinating tales: look for the painting of Jesus opposite the altar, and that of a Portuguese saint dressed like a sanyasi. Photo By: Pritham Denzil Dsouza

As a child growing up in the small coastal town of Mangalore in Karnataka, I would get into my Sunday best faster than usual if I knew we were visiting St Aloysius Chapel. The promise of steaming hot vada-chutney and masala dosa at Woodlands after Mass may have had something to do with it. But I loved the thought of climbing up those steps leading to the chapel, waiting to hear the strains of the church organ as I pushed the door open. Being amid those paintings on the walls, high arches, and ceiling never got old.


In the mid-’90s, when I enrolled at St Aloysius College for my journalism degree, the reporter bug had me digging deeper into the chapel’s history—and the paintings that had held me in awe. Built in 1885 by Rev. Fr. Joseph Willy three years after the college itself, the chapel was constructed to be a replica of the Sistine Chapel in Rome. Had I, as a pre-teen tourist walking along the Vatican Museum and the Sistine Chapel, gazing at Michelangelo’s The Last Judgment, sensed a vague resemblance between that hallowed space and my beloved neighbourhood chapel back home?

The Chapel as Canvas

On a recent visit home, I decided to see St Aloysius Chapel with new eyes, in ways I hadn’t quite looked at it as a child, a college-going teen, and later a mother taking her daughter there for the first time.

I picked up the guidebook instead of joining the free guided tour, and took my time at each painting. Out of habit, I gazed up at the pillars and arches flanking the central nave. Something was different this time—what I had believed to be marble all these years was, in fact, pillars painted to mimic stone. 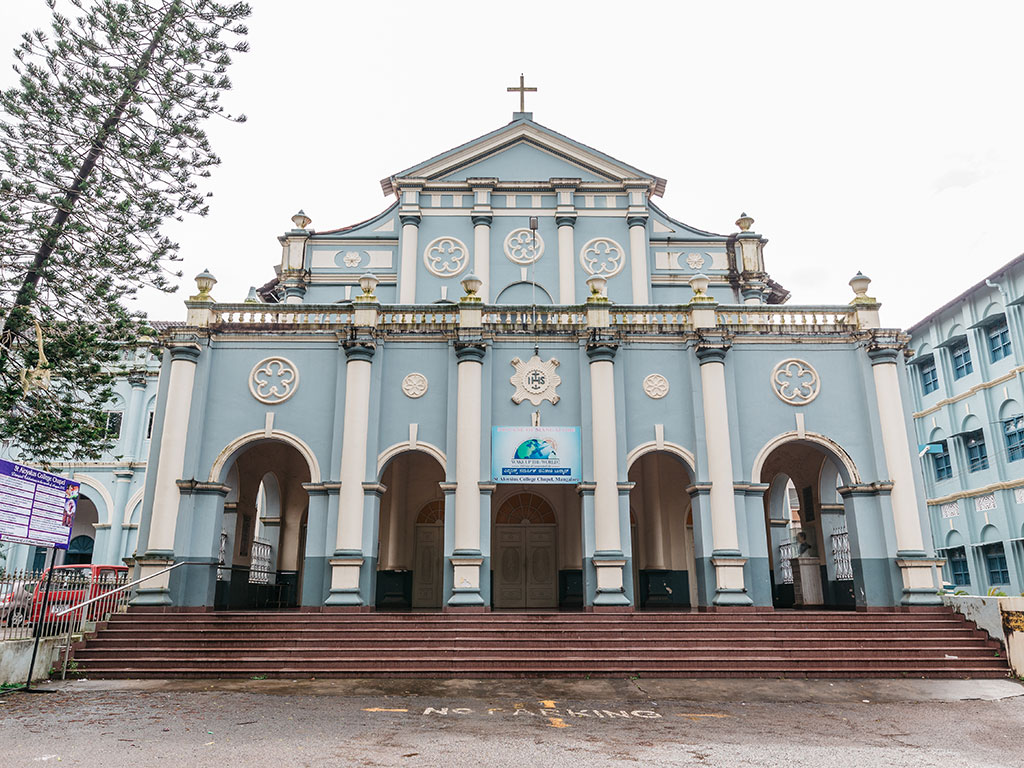 The St Aloysius Chapel in Mangalore is a sanctuary of peace and beauty for anyone who crosses the threshold. Photo By: Pritham Denzil Dsouza

The little book told me that these stories across the chapel were painted by Italian Jesuit priest Antonio Moscheni. Trained at the famed Academia Carraa in Beganeo, he was a passionate fresco painter and closely studied the paintings at the Vatican. After painting churches in Albania and Yugoslavia, he spent two years creating 6,460 square feet of frescos on plaster across the walls of St Aloysius chapel, and 4,200 square feet of oil paintings on canvas across the ceiling.

Every little detail left me with new respect for Moscheni’s techniques. “Baptism in Jordan” shows a remarkable play of shadow and light in the water. In the “Ascension of Jesus,” I could see how he used patches of plaster to give the impression of movement. I sat down in one of the pews and looked up at the central panel that depicts the life of St. Aloysius Gonzaga, the chapel’s patron saint. From here, on the slopes leading to the ceiling are painted the 12 apostles. I’d never noticed how each of the intertwined floral garlands running through the paintings were different from one another, or how each of the angels holding them up are painting to be life-size. The use of proportions and perspectives is incredible. 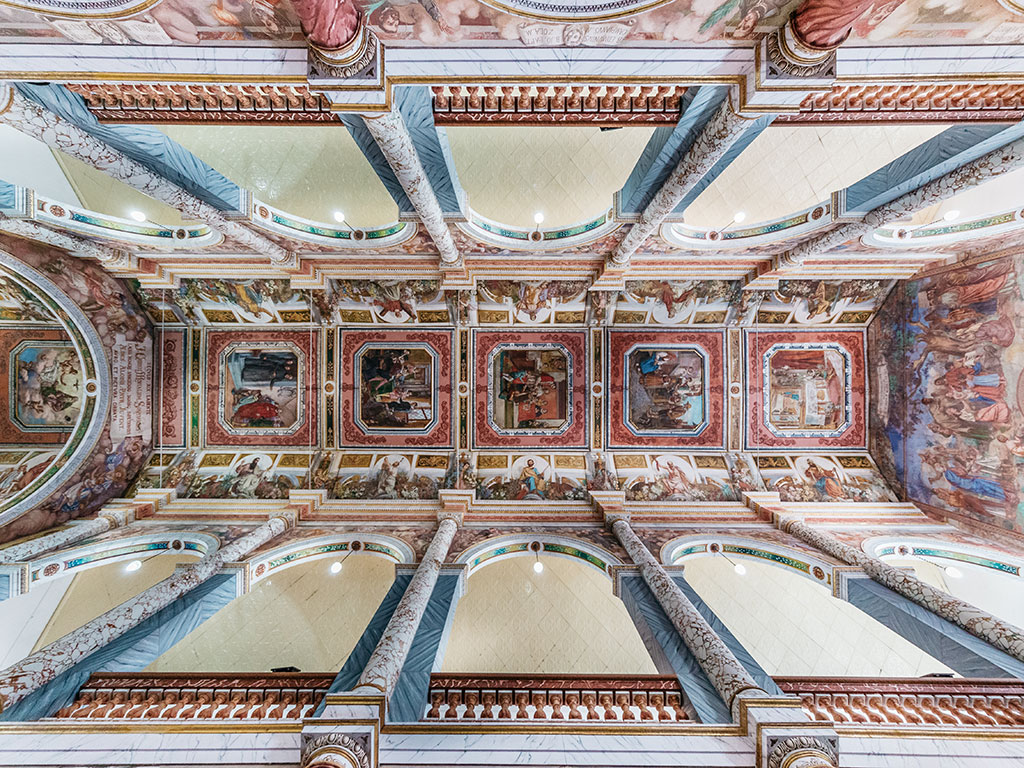 The stories across the chapel were painted by Italian Jesuit priest Antonio Moscheni. Photo By: Pritham Denzil Dsouza

Moscheni’s masterpiece—also my favourite—is the largest painting on the rear wall opposite the altar. It depicts Christ as a friend of children, and suffered the ravages of time before it was restored, save for a small patch under the half-seated woman on the right. The more I looked the more stories spoke back from the chapel’s old walls. Paintings of scriptural details of Christ’s life and saints, I knew well. But now I noticed the painting of the Portuguese St. John De Britto, the first missionary to dress like a sanyasi as a sign of adopting the local culture. My appreciation got deeper when I discovered that because paints were not available locally back then and importing them from Europe was not an option, Moscheni used dried powder pigments mixed with pure water on freshly lime plastered walls. For the oils on canvas, he used dried powder pigments with a few handpicked varieties of linseed oil.

During the five years of college, the chapel was a refuge for me and for students of all faiths. Now, as I saw people of all ages walk in silently through the same doors, I realised that the place continues to be a sanctuary of peace and beauty for anyone who crosses the threshold.

St Aloysius Chapel is located at Lighthouse Hill in Mangalore (www.staloysius.edu.in/our-pride/chapel). Free guided tours run every 30 min.   Photography inside the chapel is prohibited, but you can pick up a souvenir book with key photos of the paintings. Aloyseum, the museum opposite the chapel, houses a range of exhibits and a herbarium.