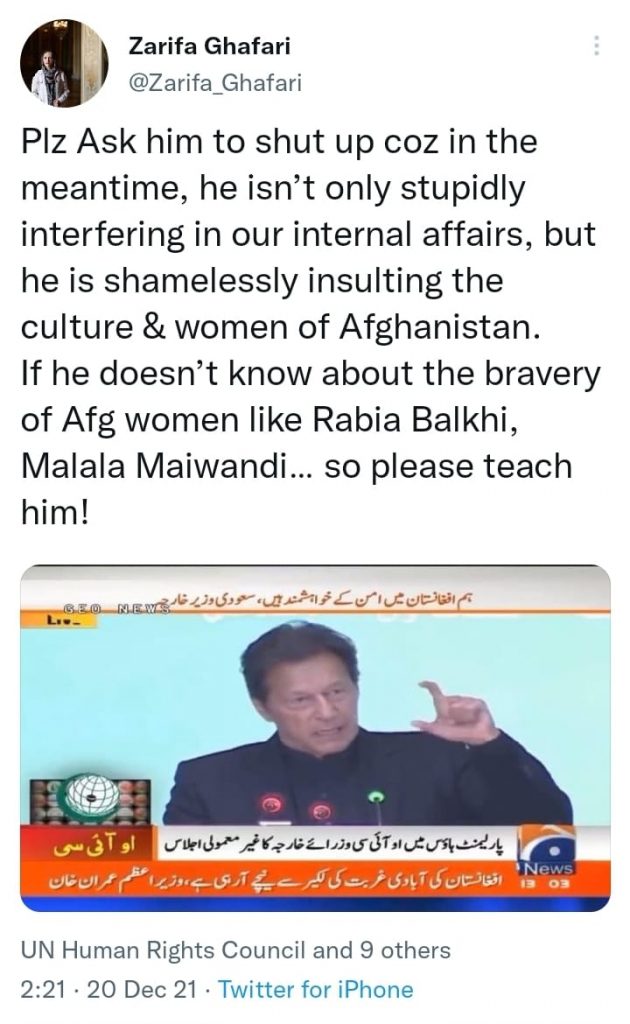 Pakistan Prime Minister Imran Khan has been hit by a wave of criticism over his recent comments defending the Taliban’s treatment of women in Afghanistan. At the Organization of Islamic Cooperation (OIC) summit in Islamabad, Khan made a statement saying that the world can’t force the Taliban to take steps on women’s rights that are against the Pashtun culture. This angered many Afghan women activists in particular who panned Khan for his “immaturity” and “boorish attempt to defend the Taliban”.

A letter addressed to the OIC ‘on behalf of the Afghan women’ on Tuesday said that Imran Khan’s comments only attempt to reinforce the Taliban mindset and justify the Taliban’s restrictions on women’s education and employment.

“We specifically would like to draw your attention to the call of the Afghan women coalition that the statement made by Prime Minister Imran Khan on the Afghan traditions regarding girls’ education while addressing the OIC meeting. Unfortunately, the statement is a projection of the challenges of Pakistan’s society on to Afghanistan,” said the letter. “Prime Minister’s statement on an international forum on why the current regressive policies of the Taliban in Afghanistan, especially towards girls and women, must not be accepted by OIC and the international community. His statement was yet again the reminder of the country’s strategic depth since the Cold War, where policy of dividing Afghans along ideology, ethnicity, or religion is at the core of Af-Pak relation.”

It said Khan failed to mention that Afghanistan was subject to constant interference from the Pakistan army since two million people were displaced from the tribal areas in the name of the “War on Terror”. Elderly men, women, and children were subject to constant surveillance and frisking by the Pakistani Army, and the presence of non-Pashtun troops in FATA (who were unfamiliar with the society’s norms) subjected the community’s women and girls to humiliation daily, said the letter, adding that the same policy will not work for Afghanistan.

“We call upon the OIC to take note of such irresponsible statements from the Prime Minister and sincerely hope that they do not become the basis of the OIC’s outlook on Afghanistan. However, we are aware that the Pakistan government might do its best to portray the Af-Pak region as a security threat to monopolize the flow of international aid and diplomatic engagements according to its strategic and financial needs,” the letter said.

Imran Khan’s bid to seemingly offer the Taliban a pass, by urging the world to understand “cultural sensitivities” and saying human rights and women’s rights meant different things in different countries, also led to a concerted campaign against him on social media.

Multiple Afghan women from all over the world called out Khan for his insensitive and regressive statement against women’s rights and for trying to incessantly interfere in the affairs of Afghanistan. 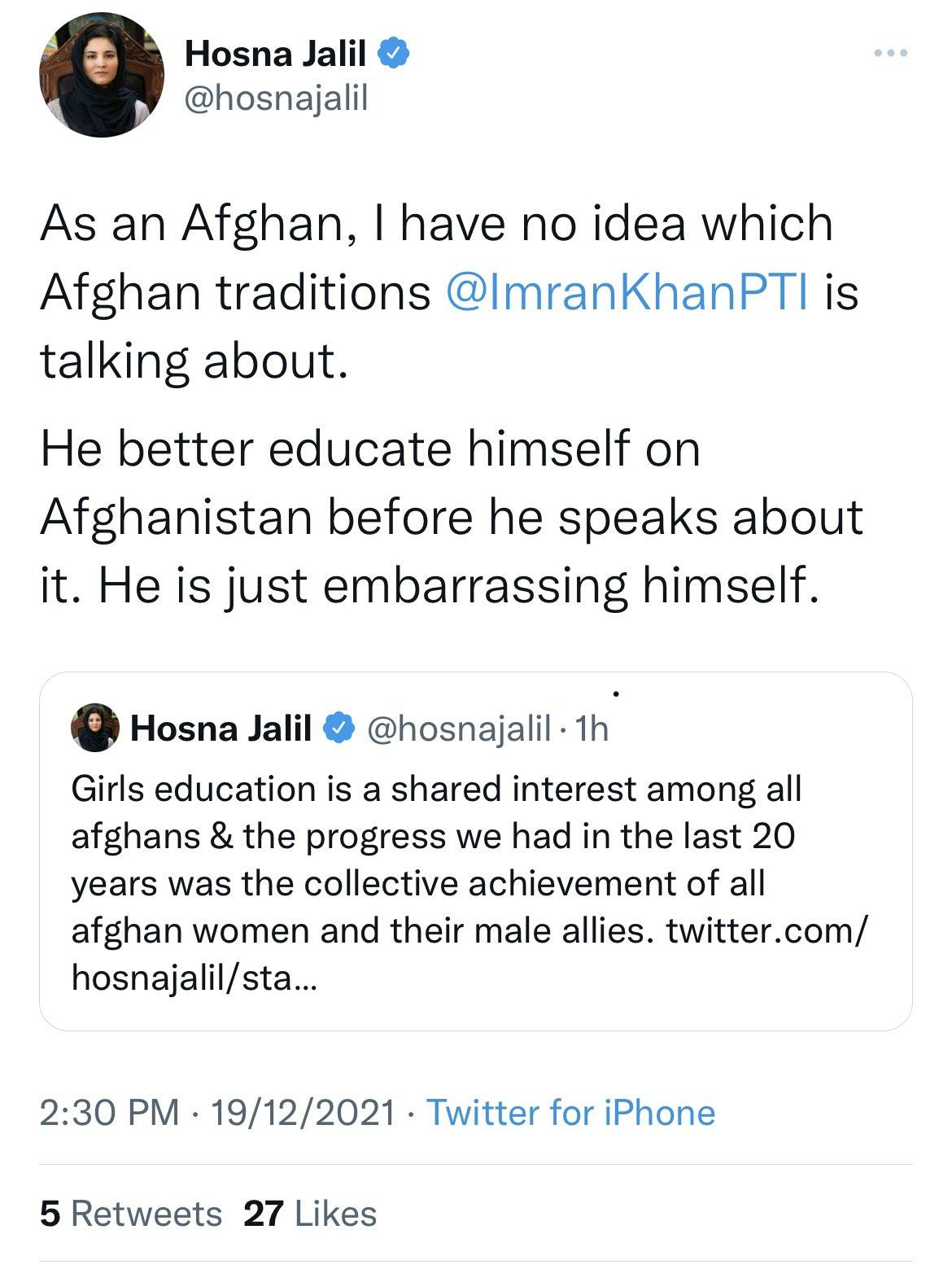 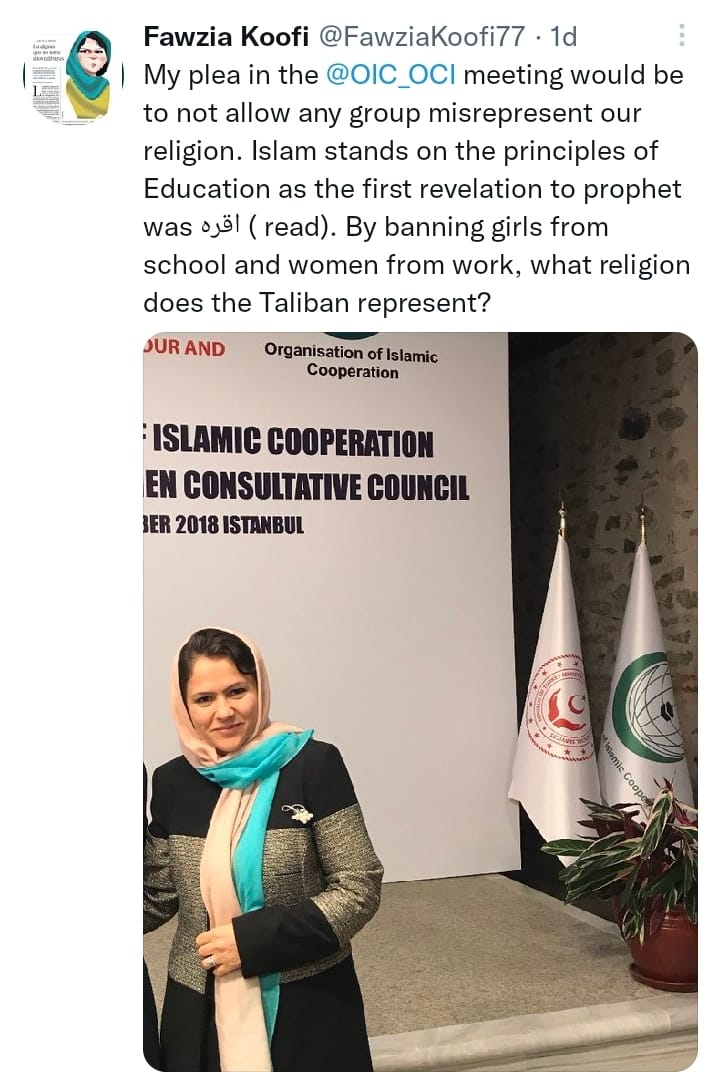 The OIC meeting saw the participation of dozens of foreign ministers as well as the special representatives on Afghanistan— which has been hit by a debilitating economic crisis— of major powers, including China, the US and Russia. It also included the UN undersecretary-general on humanitarian affairs, and the president of the Islamic Development Bank, Muhammad Sulaiman Al Jasser.

Afghan foreign minister Amir Khan Muttaqi recently told The Associated Press in an interview that the Taliban government wants good relations with all countries and has no issue with the United States, while urging Washington and other nations to release upward of $10 billion in funds that were frozen when the Islamic outfit took power on August 15, following a rapid military sweep across Afghanistan and the sudden, secret flight of US-backed President Ashraf Ghani.

The OIC summit ended with a promise to set up a fund to provide humanitarian aid through the Islamic Development Bank to Afghanistan, and this would allow countries to donate without dealing directly with the country’s Taliban rulers.