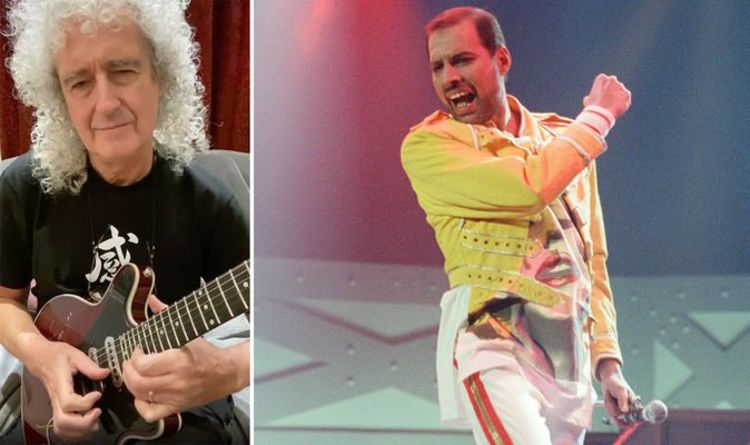 Alongside the likes of Elvis Presley, Freddie Mercury is considered one of the greatest rock performers of all time. But despite his outstanding success and talent, he would have moments of self-doubt. Nevertheless, in an exclusive interview with Express.co.uk, Brian May has shared how Freddie had the most “insane belief” that Queen really would make it.

Asked if Freddie Mercury truly believed how incredible he was and Queen are, Brian May told us: “I think he believed things on different levels. Freddie was an artist first and foremost.

“I think every artist has a great optimism and belief in what they do on one level and on another level they have a complete lack of confidence.

“They’re always asking themselves, ‘Am I any good? Am I actually rubbish? Am I an imposter?’ And I think Freddie shared those kind of feelings.

The 73-year-old said how the Queen singer would sometimes compare his art to fish and chip paper, in that it’s only good for today but gone tomorrow.

READ MORE: Brian May: ‘Queen would have fallen apart without Freddie’

Brian said: “[That] is a nice little quip and it’s quite typical of Freddie’s ability to brushstroke things aside.

“But beneath it I think is…that this is a great way to deal with the question, you do brush it off, but actually it’s something which is in your heart the whole time.”

The Queen guitarist admitted he does believe Freddie had the desires and the dreams from the beginning.

But said: “Whether he believed at rock bottom that we were going to make I don’t know.”

Asserting his belief that Freddie would still be performing if alive today, Brian said: “I think like all of us Freddie would have moments of, ‘Oh god, it’s time I quit!’

“But then you can’t. That’s the way we are. You live your life, devoted to music as we have.

“You can hear Freddie’s wry philosophy on things like Was It All Worth It, that track we did.”

The 73-year-old explained how the Queen singer lived one day at a time and had no problems with changing his mind about things.

Brian continued: “I think even if there might have been times where he didn’t feel able to go on if his health had been okay he’d have come back every time – I really feel that.

“Because it was his life. Music was utterly and totally Freddie’s life.

“He lived and breathed it. So he would never have walked away from it for very long.”

The 73-year-old rock star added that that was just his opinion, but pointed out how he and Freddie obviously spent a lot of time together.