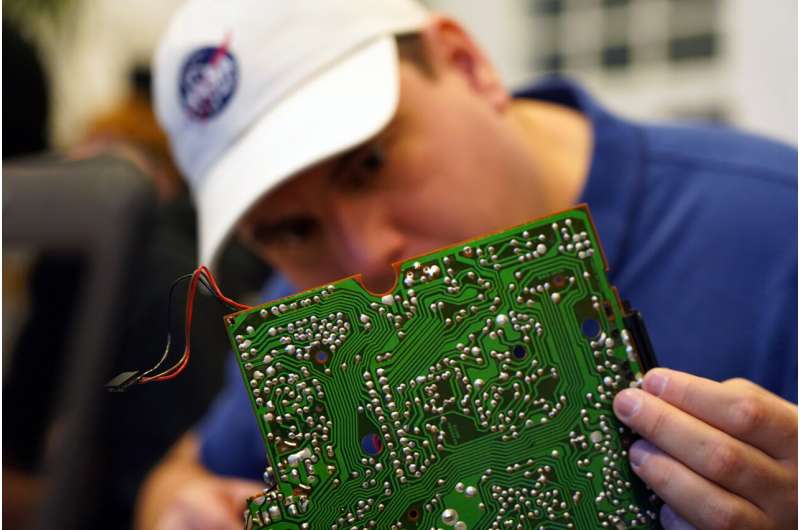 At a table scattered with tools and wires, volunteer repairers sit across from the owners of an assortment of inoperable electronics. The volunteers at a free “repair cafe” in Copenhagen disassemble and diagnose gadgets while the customers watch, each doing their part for the environment – one broken blender, radio or laptop at a time.

In Denmark, workshops where non-professionals with a bug for fixing things can share equipment and technical know-how with each other as well as the less handy are held on a regular basis. The non-profit Repair Café Denmark stages up to 15 weekly events in public libraries and community centers across the Scandinavian country.

“I didn’t want to replace it with a new one because it was such a tiny little problem,” said Ann Lisbeth Dam, who recently brought a digital radio her daughter gave her four years ago into a Copenhagen community center where restorers also worked on a nonfunctioning music speaker and a digital photo frame. In exchange, people were asked to chip in money to cover the cost of coffee.

The Danish events represent activism in its most direct, local form, but they also are part of an international movement calling for the “right to repair.” The movement, which has branches elsewhere in Europe and in the United States, is a response to the expense and environmental cost of personal electronics and appliances becoming obsolete within a few years because manufacturers make them expensive or difficult to fix.

“We have to take care of the planet. We can’t afford to live like we used to live, so we have to make a movement about not throwing things out when they’re still working,” Repair Café Denmark chairman Stig Bomholt said.

Chloe Mikolajczak, a campaigner for Right to Repair Europe, an advocacy network of 80 organizations across 17 European countries, says consumers face a number of built-in obstacles when they are deciding whether to fix or to junk a device.

According to the United Nations, Europe produced more electronic waste per capita—16.2 kilograms (35 pounds) per person compared to Africa’s 2.5 kilograms per person—than any other continent last year. More than half of the of the e-waste produced in the 27-nation European Union consists of large household appliances. Items that aren’t recycled typically end up in landfills or are shipped to developing countries.

Earlier this year, the EU introduced new rules requiring manufacturers to ensure spare parts are available for refrigerators, washers, hairdryers and TVs for up to 10 years. New appliances also will have to come with repair manuals and be made in such a way that they can be dismantled using conventional tools.

Jessika Luth Richter, an environmental researcher at Lund University and a board member for a group that runs a fortnightly repair café in the Swedish city of Malmo, said the rules don’t go far enough because in some cases only professional repair companies will be allowed to obtain parts to make sure they are installed correctly.

“A lot of the tools and manuals are only made available to professionals, and we’re not professionals. That means that we don’t get access to some of this,” Luth Richter said.

Activists want the EU to implement a so-called “reparability index” to give consumers clearer information on how easy products are to fix. France introduced a law at the beginning of the year that requires sellers to list fix-it scores based on a set of criteria that includes the availability of spare parts and ease of disassembly.

“If they’re buying a product which has a very, very poor grade, then they know that they shouldn’t expect it to be repairable,” explained Mikolajczak of Right to Repair Europe.

The Biden administration has indicated it’s in favor of “right to repair” policies. The Federal Trade Commission is moving toward writing new rules that would make it easier for Americans to fix their broken cellphones, computers, videogame consoles and tractors themselves or at independent repair shops.

Supporters see such measures as complementing both large-scale efforts to reduce greenhouse gas emissions, such as phasing out the use of coal, and consumer-oriented technology like electric cars. Manufacturers, though, argue that repair restrictions are needed to safeguard intellectual property, to protect consumers from possible injuries and to prevent cybersecurity risks.

Apple has long been a target for right-to-repair advocates because of its practice of locking down its software so that parts are encoded to a specific device. The company recently announced it would let some iPhone users fix their own phones. The shift is considered a sharp turnaround for a company that has long prohibited anyone but company-approved technicians from fiddling with its proprietary parts and software.

“I actually have the courage to open it myself next time to check if I am able to do anything about it,” said Viktor Herget, who brought a broken music speaker to a Copenhagen repair cafe.

© 2021 The Associated Press. All rights reserved. This material may not be published, broadcast, rewritten or redistributed without permission.