Asia-Pacific markets may see a neutral open as a stronger US Dollar weighs on risk-sensitive currencies such as the Australian Dollar and New Zealand Dollar. Market sentiment has held up fairly well in the face of the quickly spreading Delta Covid variant, although traders are keeping a close eye on the strain’s impacts across major economies.

The region’s economic recovery showed a small road bump on Wednesday when China reported a slight decline in its factory activity. While the manufacturing purchasing managers’ index (PMI) for June via the National Bureau of Statistics (NBS) beat expectations, it saw a decrease from the prior month. However, a highlight in the report showed a pickup in new orders growth, an encouraging sign for the coming months.

Still, the Asia-Pacific region and other regions across the globe face a much larger slowdown threat if the Delta Covid variant manages to drive up case figures to the point where policy makers are forced to enact additional lockdowns. In fact, Australia is already in the beginning phase of a two-week lockdown in portions of New South Wales (NWS), including the city of Sydney.

New Zealand announced that its travel bubble with Australia – which was halted over the weekend – will resume in early July. The travel corridor was suspended due to Covid outbreaks in Sydney and other portions of Australia. New Zealand government officials are closely monitoringcase figures in Australia due to the number of travelers entering and exiting the two countries over a daily basis. New Zealand’s Prime Minister Jacinda Ardern said earlier this week:

“The rise of the Delta variant and the risk it poses to the trans-Tasman bubble means it’s timely to consider additional measures for our toolbox to strengthen the bubble and reduce the risk of COVID-19 spreading in New Zealand.”

Thursday morning, building permits for May saw a -2.8% drop on a month-over-month basis. That is down from an upwardly revised 5.1% increase in April, according to the DailyFX Economic Calendar. The economic indicator is used as a barometer to gauge consumer confidence in the housing market. Last month’s reading is the first negative number since February when permits dropped 19.5%.

The New Zealand Dollar has seen muted price action over the past 24 hours against the US Dollar. The currency pair is trading below a level of prior support seen through early April trading after dropping back below the 200-day Simple Moving Average earlier this week. That early April level may serve as resistance on the next push higher. To the downside, March support near the 0.6941 level could underpin prices. 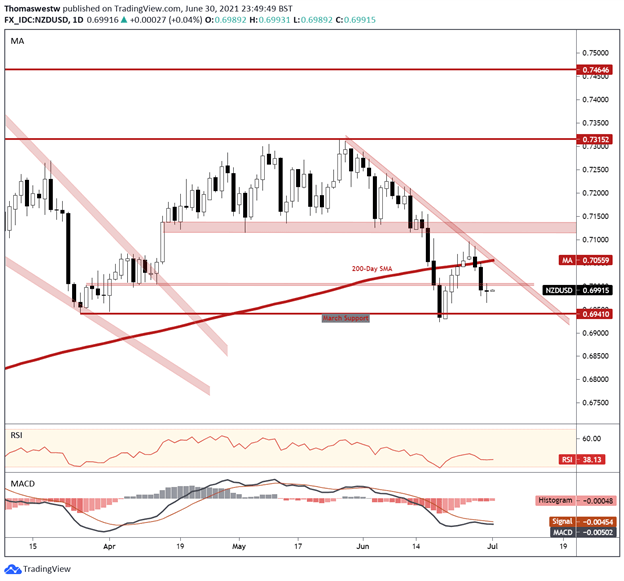