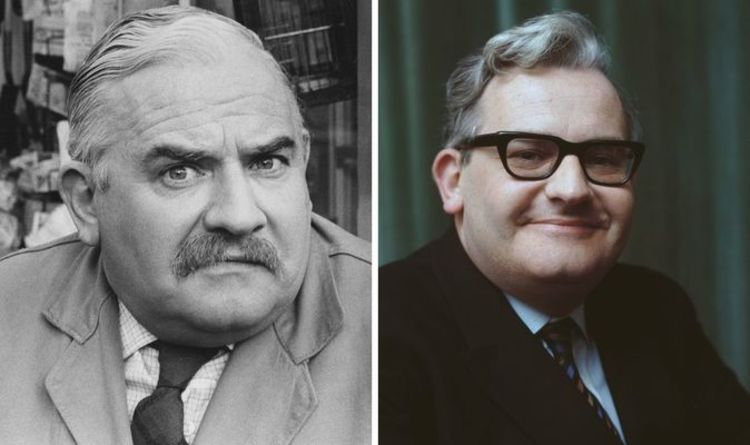 Ronnie Barker played half of the dynamic duo in comedy sketch The Two Ronnies, alongside Ronnie Corbett. The beacon of comedic excellence sadly passed away in 2005, aged 76, from heart failure.

He made his acting debut in 1948 as Lieutenant Spicer in a performance of J. M. Barrie’s Quality Street.

He dedicated his career to comedy and was passionate about making others smile and laugh.

In ‘And It’s Goodnight From Him …: The Autobiography of the Two Ronnies’, Ronnie explained: “I want to make people laugh. Never mind about Hamlet. Forget Richard the Second. Give me Charley’s Aunt. My mission in life was now crystal clear.”

His long and illustrious career spanned almost 40 years, before he retired in 1987, although Ronnie did make occasional appearances on TV after this, mainly with Ronnie Corbett.

For his services to entertainment, he was awarded an OBE in 1978, and his comedic legacy has lived on posthumously.

In 2005, Ronnie Barker and Ronnie Corbett were two of the first 100 people given stars on London’s Avenue of Stars.

His legacy has lived on and he is remembered as an iconic, world-class comedian.

Indeed, in 2005 he was voted as the 16th greatest comedy act ever by fellow comedians and comedy insiders.

Idol Net Worth reported that Ronnie Barker had $5million to his name.

This is equal to around £3.78million.

He had been married to his wife, Joy, since 1957, and had three children, Larry, Charlotte and Adam.

The rest of his estate was given to his wife, who was the executor of his will.

Her estate was reportedly worth £6,520,426, which was to be divided equally between her and Ronnie’s three children.

At Ronnie Barker’s Westminster Abbey memorial service, where approximately 2,000 were in attendance, four candles accompanied the cross rather than two, in fond reference of The Two Ronnies’ hilarious Four Candles sketch.