Canadian Dollar Caged in by Inflation Favouring USD on Energy. Where to for USD/CAD?

The Canadian Dollar retreated today as the US Dollar found support, with yields moving aggressively higher on inflationary fears. The energy surge continues, with Brent crude oil approaching US$ 80 a barrel and US natural gas at levels last seen in 2008. The main APAC equity bourses went lower despite a positive lead from Wall Street.

The spike in inflation earlier in the year was dismissed as a ‘base effect’. As the low numbers of 2020 rolled out of the annual number. The high inflation then became a ‘transitory’ phenomenon.

If inflation remains higher for longer, long duration bets deteriorate from a risk-return perspective. In this environment, investors prefer to sell long bonds and move further down the yield curve toward cash.

US Democratic Senator Elizabeth Warren continued to express dismay about the performance of Federal Reserve Chairman Jerome Powell. His current term is due to expire in February and up until now it had been widely expected that he would be stamped with another one.

While Ms Warren’s focus was on the integrity of fellow Fed members, market participants might start to ask questions around what prolonged transitory inflation means for US economic prosperity.

The RBNZ raised the official cash rate (OCR) rates by 25 basis points to 0.50% today as domestic pressures forced their hand despite an uptick in Covid-19 cases. As USD moved higher on safe-haven buying, NZD went lower with AUD and to a lesser extent CAD and NOK, as the latter have significant oil exports.

USD/CAD has consolidated today after several session of making lower lows. A short-term Death Cross was made on the move lower when the 10-day simple moving average (SMA) crossed below the 21-day SMA. 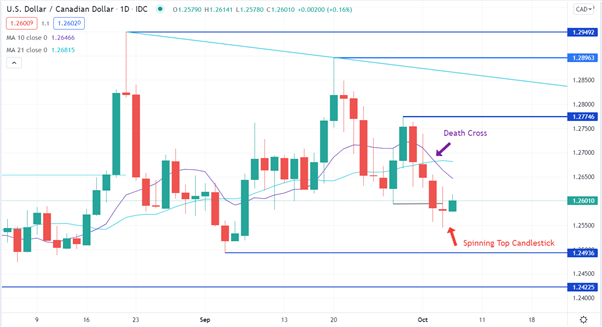