Equity markets traded broadly mixed during Asia-Pacific trade, with Australia’s ASX 200 and Hong Kong’s Hang Seng Index climbing higher while China’s CSI 300 and Japan’s Nikkei 225 lost ground. The Australian Dollar spiked higher in the wake of the Reserve Bank of Australia’s interest rate decision, before continuing its downward slide towards the back-end of the session.

Looking ahead, trade balance data out of the US and Canada headline the economic docket alongside manufacturing PMI figures out of the United Kingdom.

Short-Term Pullback Ahead for CAD

The commodity-sensitive Canadian Dollar has been one of the top performing major currencies in recent weeks, on the back of the Bank of Canada tapering its Quantitative Easing program and moving forward rate hike expectations.

Resilient crude oil prices, and a ramped up vaccine roll-out have also helped elevate the currency against its haven-associated counterparts, with the USD/CAD exchange rate sliding just over 3% lower in the last six weeks. Canada is now vaccinating as many citizens a day, on a per-capita basis, as the UK and US. 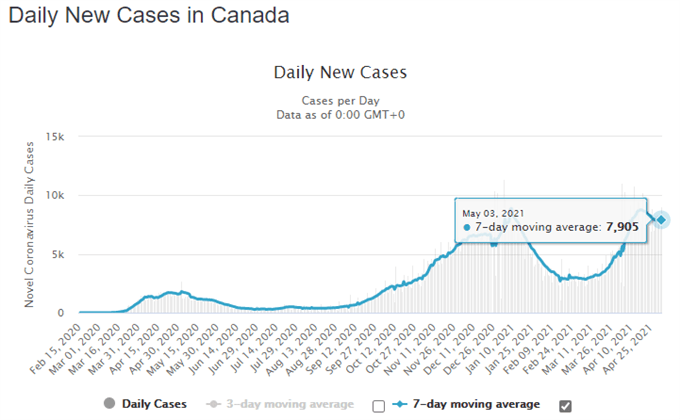 However, infection numbers have yet to meaningfully decline, with the 7-day moving average tracking cases hovering just shy of 8,000. This suggests that current restrictive measures may remain in place for an extended period of time.

These development could begin to take some shine of the Loonie’s recent run higher, and see its haven-associated counterparts peg back lost ground in the coming days. Disappointing employment data for April, scheduled for release on May 7, may intensify this downturn. 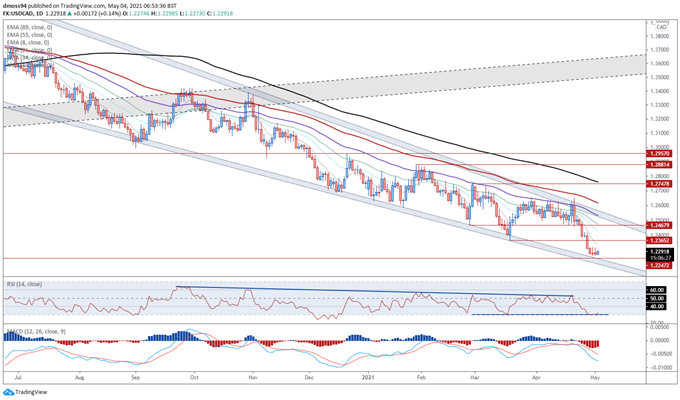 From a technical perspective, the USD/CAD exchange rate could be poised to rebound higher in the near term, as price approaches key support at the 2018 low (1.2247).

Bullish RSI divergence, in tandem with the plateauing slope of the 8-EMA (1.2338), may encourage would-be buyers.

Remaining constructively positioned above 1.2250 likely paves the way for price to retest former support-turned-resistance at the March low (1.2365). Hurdling that brings the February low (1.2468) into the crosshairs.

However, if support gives way, a continued downside push to psychological support at 1.2200 is more than likely. 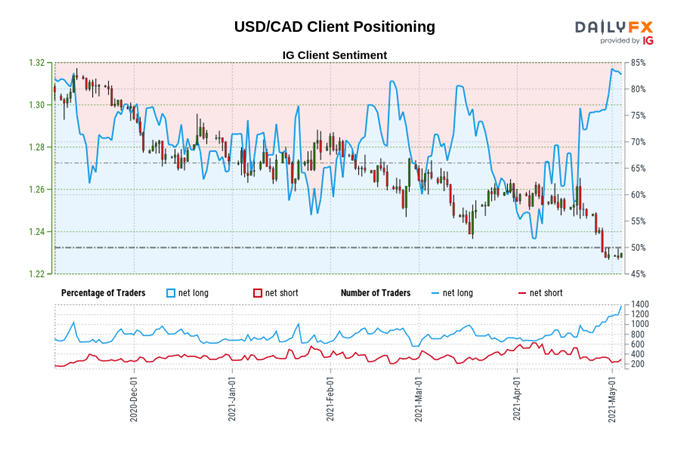 We typically take a contrarian view to crowd sentiment, and the fact traders are net-long suggests USD/CAD prices may continue to fall.

Traders are further net-long than yesterday and last week, and the combination of current sentiment and recent changes gives us a stronger USD/CAD-bearish contrarian trading bias.