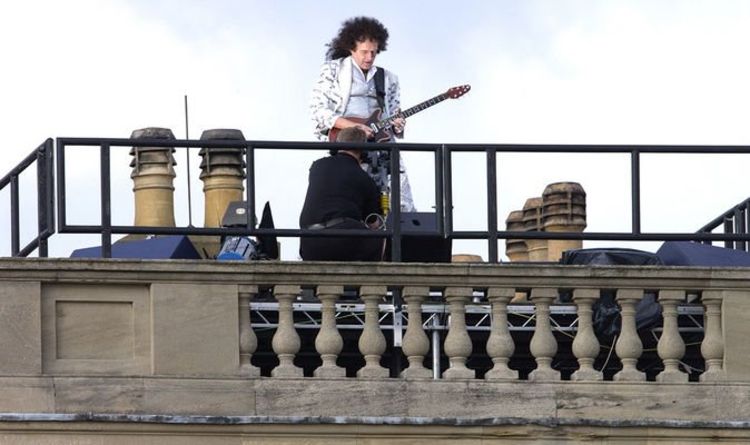 It was 19 years ago today that Brian May played a God Save The Queen guitar solo on the roof of Buckingham Palace for The Queen’s Golden Jubilee Party at the Palace. And today the 73-year-old has shared the clip on his Instagram page admitting that thinking about it still makes him nervous. Brian wrote: “Wow! Wow ! It was 1[9] years ago today ?”

Brian May added: “I can still feel the fear in my stomach !! This was a life-changing moment for me.

Yesterday Buckingham Palace announced details of celebrations to mark what will be The Queen’s Platinum Jubilee next year.

The four-day Bank Holiday weekend will last from Thursday June 2 to Sunday June 5.

While a musical highlight will be a live concert called Platinum Party at the Palace which will feature “the world’s biggest entertainment stars.”

Last October, Express.co.uk asked Brian if Queen and Adam Lambert would be up for performing at the event marking Queen Elizabeth II’s 70 years on the British throne.

However, when we asked if Brian would reprise his Buckingham Palace rooftop guitar solo, he was very quick to say no.

Brian added: “After I’d done that I felt I’d never be afraid of anything again. That was truly walking on the edge of a precipice.

“Forever I will be proud of that moment because that was really breaking barriers, breaking frontiers.

“And so much could have gone wrong. I’m so grateful that it didn’t!”

Queen and Adam Lambert are set to tour the UK next June, but interestingly Saturday June 4 2022, the date of the Platinum Party at the Palace, is a day off.

The band are performing in Glasgow on June 3 and at London’s The O2 on June 5, so they’ve certainly got time to feature at The Queen’s special concert in-between.

Talking of Queen jubilees, the legendary band has their Golden one this year, marking 50 years since John Deacon teamed up with Brian, Freddie Mercury and Roger Taylor.

While Queen and Adam Lambert aren’t performing this year, Roger is setting off on his solo tour this October.

The 14 concerts across the UK will coincide with his new solo album Outsider, which was recorded in lockdown.