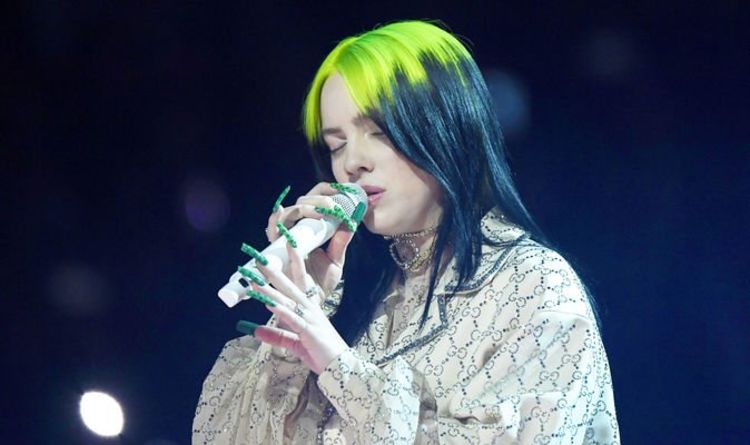 Teen pop-star Billie Eilish acquired another pair of gongs this month at the Grammy Awards. On top of winning Record of the Year for Everything I Wanted, she also made history with her James Bond track, No Time To Die. Her win for Best Song Written for Visual Media was the first time the film in question had not yet been released. Billie has been improving her singing and musicality her entire life, her mother Maggie revealed in an interview last year.

She said: “Finneas became obsessed with music!” while Billie had been exploring her talents for as long as she could.

She continued: “Billie never ever stopped singing – I mean it was insane.

“She sang practically before she talked. She sang everything, everywhere!”

Maggie revealed: “The depression was the hardest part of all this.

“We checked in with her all the time: ‘Do you still want to do this, do you want this?’

“She loved doing the shows. That’s what kept her going.”

The young star also opened up on the personal struggles she dealt with during this time.

Billie said: “I was actually clinically depressed – that was the beginning of it. But then on top of it all was the fame that I didn’t want at the time.

“It was the unability to go out places and it was so torturous, because all I wanted to do was go hang out with my friends.” (sic)

Billie previously revealed how this dark period of her life, and a collection of reoccurring nightmares, inspired the creation of her debut album, When We All Fall Asleep, Where Do We Go?

Speaking to Zane Lowe about her work, the youngster explained: “The album is basically what happens when you fall asleep.”

Billie continued: “For me, every song in the album… there is sleep paralysis. There’s night terrors, nightmares, lucid dreams.

“Sleep and not sleep have always been a big part of my life. I’ve always had really, really bad night terrors.

“I’ve had sleep paralysis five times. All my dreams are lucid so I control them. And I know that I’m dreaming when I’m dreaming so… I don’t even know.”

She added she can sometimes see the future in her dreams, saying: “Sometimes I’ll have dreams where the thing that was in my dream will happen the next day. It’s so weird. It’s so weird.”