Crude oil and liquid natural gas prices continued to be supported through the Asian session as the tropical storm approaching the Texas Gulf Coast was upgraded to “Hurricane Nicholas”. It is not expected to directly hit the bulk of energy fields, but it is seen impacting supply infrastructure.

WTI crude oil inventory levels have not been fully re-stocked since Hurricane Ida. Meanwhile, an OPEC report cited increasing demand for oil in the US. The amount of additional barrels per day being added by OPEC+ is roughly half of the supply capacity lost by US gulf producers.

Equities and interest rate markets were quiet throughout APAC trade today, but the Japanese Nikkei 225 index did have a look at 30-year highs. Hopes for expanded stimulus when a new prime minister takes the reins continue to cheer investors.

RBA Governor Lowe said he sees a significant Australian GDP contraction in the September quarter and played down any chance of a rate rise before 2024. The Australian Dollar lost ground as a result. He later said that he expects the economy to bounce back strongly once the lockdowns are over.

Markets are awaiting the highly anticipated US CPI number for clues on how Fed policy will evolve ahead. The risk for markets is an especially eye-catching outlier result on this indicator, as this would raise the possibility of a strong reaction markets-wide.

Oil breached above the most recent previous high of 70.61 and has broken out of a descending trend channel as it continues to consolidate above the 100-day simple moving average (SMA). The next possible resistance levels will be at the previous highs of 74.23 and 76.90. 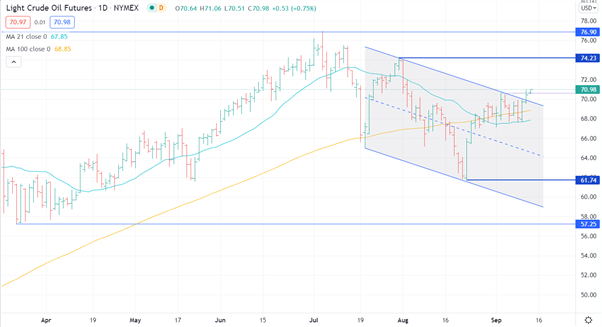